A couple of weeks ago, Thump hosted a clothing/jewelery sale during the day before their party began. It was kind of strange to see this place filled with racks of clothes...

This band played at Meat last week. It was a good show. They were pretty theatrical: lots of synchronized movements and spinning and so on.

All four acts were really good! This was a great show all around. It also unfortunately, set our low-attendance record, previously set in August: this time we got just over 20 people total, and about half of them left after Scar Tissue. The bands were good sports about it, though, and really put on a show despite there being so few people there. I think there were like 5 or 10 people left by the time Railer played, but they still totally rocked out.

Emulsion was one guy behind a stack of gear doing good trancy electronic stuff. Scar Tissue do excellent breaksy industrial with wacky noisemakers and live drumming. High Blue Star were a gothy/triphoppy band with a girl singer and a combo of electronics and guitars. Railer were a really energetic rock band, leaning toward the "electroclash" side of things a bit.

The Railer folks were also using their tour as an opportunity to campaign against the Diebold voting-machine fiasco that you've probably already heard about: Railer got a write up about this in Wired News, and there's a QuickTime interview of them at musicforamerica.org.

And you missed them! Shame on you!

At Flavor on saturday, DJ QBert was the headliner. He came out with a single turntable and did all kinds of crazy scratching tricks on it. It was pretty impressive -- for the duration of his marathon 30 minute set! That's right: people paid $25 to see this guy, and he performed for 30 minutes. And that was a rarity: apparently he normally only does 15 minutes!

Still, it was quite an amazing display of skill and dexterity. Not much to listen to, though; after the first few minutes of wukka-wukka scratching noises, the thing it made me think of most was "what if Eddie Van Halen's guitar only had one string, and he was the only person in the band."

Another good show... The Fixx played mostly newer stuff, but also did the requisite hits (fairly different arrangements of them.) They were really tight, and seemed like they were having a great time. He can really sing.

Oh, and house band Sunshine Blind were great as always. 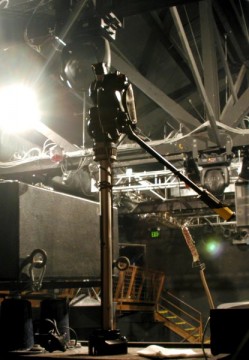 I don't get to build things around here very often any more, so this gadget I hacked together made me happy: one of the webcast cameras sits on a tripod up in the dj booth (it's the one that is generally pointed at the DJ or zoomed in on the singer, since they tend to not always be in the same place.) Well, there's not a lot of room up there, so it gets bumped a lot, and it's hard to adjust because the tripod legs don't quite fit on the counter... So I took an old, broken tripod and converted it to a monopod, which I then bolted down! It seems to be working out very well (though the camera does vibrate a little more than before.)