And now, another tale from the trenches.

It was around 2AM, and as is the custom in these parts, our staff were going around and taking alcohol away from people. Suzanne took a cup from a girl who then turned and puked right on the dance floor. "Oh my god, you just puked on the dance floor!" exclaimed Suzanne. "No I didn't!" said the girl. Suzanne summoned an escort to introduce the girl to the great outdoors.

Suzanne then noticed that the cup she had just taken from the girl was full of vomit.

Oh, and there was no need to clean up the puke on the dance floor: the dancing feet made it vanish of its own accord before anyone could get a mop over there.

And may I again take this moment to point out that there are people in the world who think it's a good idea to TAKE OFF THEIR SHOES in nightclubs?

Photos of the Male or Female / E-Craft / Terrorfakt show are now up. 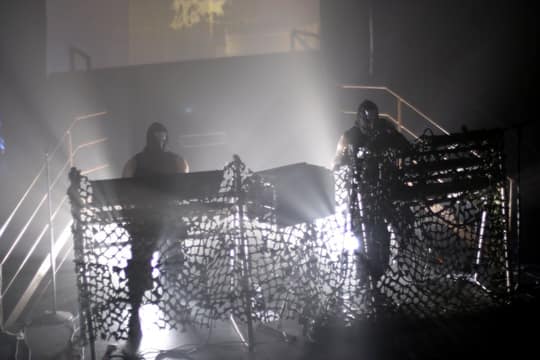 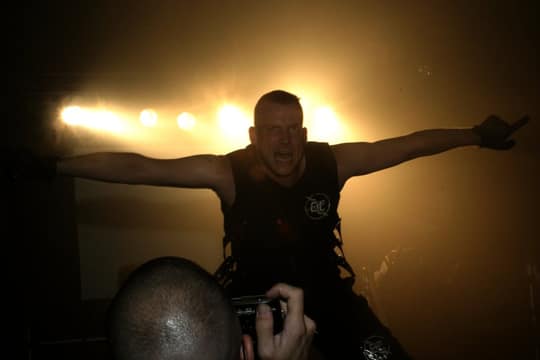 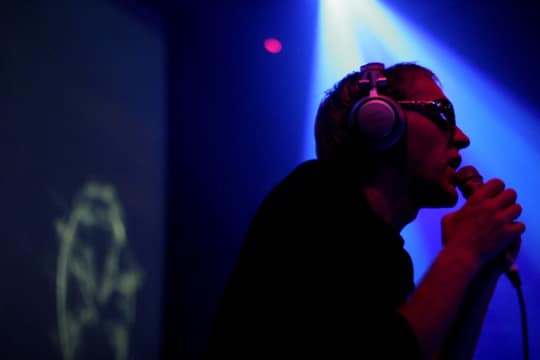 Male or Female were amazing. They are a Front 242 side project, and the music is in the same vein as later 242, though on the mellow side: live guitar and occasional vocals over many, many layers of electronics. More funky than hammering. Great stuff.

They also had one of the best videos I've ever seen at a show. I know that sounds like a goofy thing to say, but it was really cool; I wish I had a copy to just watch! It was really sophisticated (mostly?) computer-generated landscapes and insects and machines, and it was (to some extent, at least) synched to the music.

E-Craft was a couple of german guys doing the pep-squad thing, like some kind of militant boy-band. Their music wasn't bad, but their performance didn't do anything for me. The thing I kept wondering about, though, was why -- considering that these guys were basically copping Front 242's 1989 act, which I loved at the time. What's different now? Am I just "over it" (as 242 themselves seem to be?) Or is there something different this time around? Well, one difference is that in '89, I spent the whole show getting crushed in the pit, which certainly put a different spin on things.

Terrorfakt were a couple of guys doing really good powernoise. Actually it was more structured and less chaotic than most powernoise, so maybe that's not quite what it was, but I liked it. They were a couple of guys in hoodies and wrestler masks hiding behind their camo-covered keyboard racks while a Skinny Puppy-esque video of nazis and suicides and bombings played behind them.

You could barely see them at all, but (good for them!) they realized that two guys playing keyboards isn't much of a spectator sport, so they played a movie instead.