Last week, some guy lost his cell phone and spent a long time demanding of the bartenders, and then of security, that they turn the house lights on so that he could look for it. "Look around you, pal: there are hundreds of people here dancing. We're not turning on the lights because you dropped your phone", they told him. "You don't understand," he explained, "you have to turn on the lights right now!" Amazing. Where do people come up with this combination of obliviousness and entitlement?

We get so many cellphones that are unclaimed -- most people apparently aren't so concerned about getting them back as this guy. Not to mention drivers licenses, passports, credit cards... The credit cards I can understand, since those are fairly easy to cancel/replace, but getting replacement licenses and especially passports is a huge hassle! A while ago I started taping the unclaimed licenses to the office wall; it covers almost three square feet now. I wish I had thought of this two years ago: it'd be huge by now.

Some photos from the weekend: New Wave City and Z-Trip. I tried a new trick when taking the NWC pictures: I'd set up the shot, then stare at Harlan at the lighting board; when he looked like he was about to reach for the button that fires the strobes, I'd take a 2 or 4 second shot, resulting in some reasonably-well-lit multiple exposures. It came out a lot better than my flash pictures usually do, anyway...

The Z-Trip show was totally packed! We sold out -- it's been a while since that's happened (DJ Krush in February, I think?) And on a sunday no less. Our friends at PG&E will be glad to hear this. 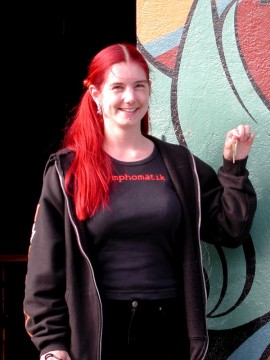 before
(we are happy) 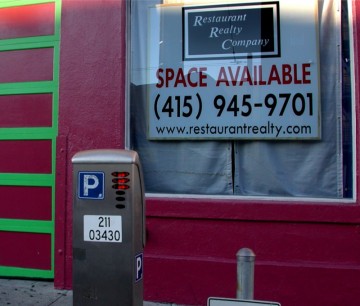 after
(we are sad)

As you know, the restaurant next door (Dulcinea) has closed, but just after they opened, Georgia and David (not that David, the other David -- no, the other one) were contestants on a cooking-battle show called "Food Fight". I've just learned that their episode is finally going to air on Sep 11 at 10PM ET on the Food Network, so set your Tivos...