<< May
Jul >>
DNA Sequencing
with your host
Jamie Zawinski
Support DNA Lounge!
Your donation helps ensure that we can continue bringing you the kind of awesome, eclectic and weird events that you've come to expect from us! Your donation keeps us independent, and lets us continue to take chances on the kind of local live entertainment that makes San Francisco great. Won't you pitch in?
To support us on a monthly basis, please subscribe to the DNA Lounge Patreon!
2-Jun-2003 (Mon)

hi, could you tell me where to start to get the proof of a baby belonging or not belonging to a man. the baby is to be born in august. is there anyplace that this person can go without hiring an attorney or without paying a lot of money?
thank you,

I just noticed that this site is hit #5 on a Google search for "DNA", hit #6 on Alta Vista, and #6 on AOL Search. Perhaps it's surprising that we don't get even more of these. Oh, but we're not even in the first hundred hits on MSN Search, which is what WebTV and MSIE use by default. That must explain it.

Photos of the New Wave City Black and Black Ball are up.

Please don't do this: 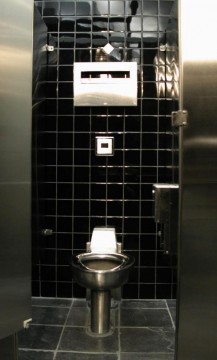 Teen prisoner adds to woes by getting arm stuck in toilet.

INDIANA, Pa. -- Should the question arise, the answer is yes, indeed, you can get your arm hopelessly stuck in a prison toilet.

Confirmation comes courtesy of a 19-year-old inmate at the state prison near Indiana, Pa. The way inmate Raymond Davenport told it to corrections officers, he just didn't buy the tale about a fellow inmate getting his arm wedged in a prison cell toilet a couple months ago. [...]

In a low moment for scientific experimentation, Davenport didn't prove anyone wrong. He got his arm wedged deep in the stainless steel toilet.

He called for help. Prison maintenance workers had to unbolt the toilet from the floor. And prison officials called for the Indiana Volunteer Fire Co., four miles away, to bring an air chisel to cut the toilet from Davenport's swollen arm. [...] Davenport, doing time for aggravated assault in the Lehigh Valley, now owes his commonwealth the price of a stainless steel toilet.

Can you guess by my lack of updates that nothing terribly noteworthy has been happening at the club?

I made a bunch of tweaks to the web site in the last few days; the most noticable part is that the layout of this log has changed slightly. I got rid of the big blank space to the right of the menu and put log entries there; but, after the first few entries, they move down to below the menu, to take advantage of the full width of the page (so that I don't end up just trading the blank space at the top for a bigger blank space down the left edge.) It would have been nice to be able to do this by just making the menu float, and letting the text wrap for real, but it looks terrible when the break happens to fall in the middle of a paragraph, so I'm just doing it by hand.

This means that, yes, this page is best viewed by coming over and looking at it on my monitor. Since if your font sizes or window sizes are radically different than mine, then unsightly blank spaces show up. (April is probably a better example of what I had in mind than this month is, since the first few entries here are short.)

I also followed Studio Z's lead and added an iCal feed of the calendar, in addition to the existing RSS feed. This means that if you're using a calendar program that supports vCalendar (e.g., Apple iCal, Mozilla Calendar, or Ximian Evolution), then you can subscribe to the DNA vCalendar URL, and our events will show up in your calendar. From there you can sync it to your Palm, or phone, or whatever. Neat!

There's a lot of lameness in these programs' handling of vCalendar, though: I had to tell it that all the events end before midnight, otherwise both Mozilla Calendar and iCal totally lose their minds.

None of them seem to let you make the text clickable by using ALTREP (which is the vCalendar version of A HREF). Mozilla Calendar won't show you the full text of the entry in the calendar, even when there's enough room: it only shows the first six characters of the title in the window. A tooltip shows the first 4 lines of the description, and you can only see the whole thing if you double click. At least it will show you the URL in the double-click popup: iCal doesn't show it at all.

And so on. Plus, it's all plain-text only, no HTML! What year is this?

Photos are up of Thump and of last month's Flavor (including a bunch of the breakdancers.)

Oh, here's something that's been bugging me for a while that I keep forgetting to bitch about here. Quite some time ago, some buttmuncher scratched their name into the mirror in one of the upstairs bathrooms. They scratched it deeply enough that it can't be buffed out. These are single person bathrooms, leaving people lots of time for "creative" redecorating like this. For example, as I've mentioned before, people keep stealing the soap dispenser pumps from the sinks. Not the whole dispenser, mind you, just the top part. Why? Why?

Anyway, the only way to fix this is to replace the mirror, which would cost about $100. And we have such better things to spend that much money on than graffiti removal. So every time I go in there and see this jackass's sputum on the mirror, I think, "you assholes can't have nice things: we're just going to leave this bathroom locked all the time, so that it won't get destroyed. You've spoiled it for everybody, and I hope you're happy!"

But then I realize that if I did that, I would have paid for the construction of a pristine bathroom that never got used.

Which would be pretty damned silly.

I'm tempted to just rip the mirror off the wall, since I think I'd rather see the glue-pocked tile underneath than give this overgrown adolescent the satisfaction of knowing that people are still seeing his/her contribution to "street art" or whatever the fuck they call it when vandals carve their names into other peoples' property.

Photos of the Naughty Nursies event are up. This was a fundraiser for the St. James Infirmary, a free clinic for sex workers. It was a good turnout, and a lot of fun! There were, I think, thirteen separate acts on the main stage, six of which were real bands. I was impressed at how well orchestrated the whole thing was: each band only did a short set, but there was very little down-time between acts. When I saw how many folks they had booked, I thought there wasn't any way they'd make that work, but they did... Oh, there was also at least one band playing upstairs in the lounge, but I missed them.

We were having some lighting trouble, though: the dimmers kept flaking out, making the stage lighting go dark for a few seconds every few minutes. This is possibly due to the recent high temperatures, but it's possible something else is wrong too (since this didn't happen last summer.) Jeremy is still investigating...