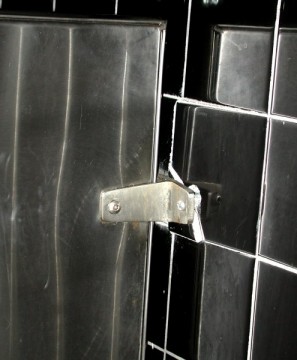 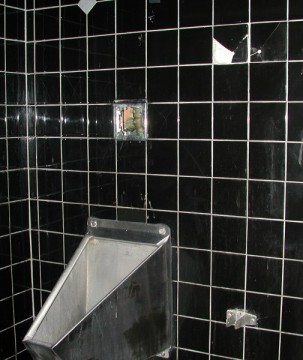 It's so great when the members of the DNA Lounge community decide to get together and pitch in with their impromptu improvements to the space! This friday, some thoughtful fellow decided to donate a little remodeling work to our bathrooms. Apparently he decided that things would look a lot better if the partition divider between the two farthest urinals were removed from the wall. Hey, if that was you, there's no need to be bashful about it: come forward! We'd love to reward you appropriately for your generosity.

Oh, he also absconded with the toilet's motion sensor flusher. Took it right out of the wall.

The second partition is also barely hanging on, as you can see. This isn't the first time this has happened, and it's getting harder to fix, since now the wood studs behind the tile are all torn up from having the bolts ripped out. Clearly we needed to have built the bathroom partitions and walls out of solid steel, like so much of the rest of the club, if we intended them to stand up to these fucking savages.

Besides trying to figure out how to keep our fixtures attached to the wall, we've been trying to work out how to do live music one night a week.

Actually we've been talking about this since at least a year before we opened. Every few months we say, "come on, we've got to do a local band night or something. Just something small and cheap." And then we do the math, and realize that it's really a lot of work, and there's very little chance of it even breaking even.

But, I think we're finally fed up with talking ourselves out of it, and more to the point, fed up with only having live music here every couple of months, so we're probably going to actually do it this time.

The night in question will probably be wednesdays, and there probably won't be any overall theme to it, other than, "bands" (by which I mean, anything but djs or so-called "live PA.") The problem with this plan is that most of the bands won't be a big draw, and our break-even point will be pretty high: chances are we'll be losing money if fewer than 150 to 200 people show up, which will almost certainly be most of the time. It's amazing how much it costs in salaries alone just to open the doors here, even with the most minimal staff we can get away with. So we need to figure out if we can afford to burn that much money every week, subsidizing it with our usual friday bullshit. I hope so, because there are currently no live acts on our calendar at all, and that's a sad thing.

Even if we end up doing mostly local acts who don't expect to get paid much, live shows are really expensive because there's so much that goes into each event, in addition to our usual bar, security, and cleaning staff: there's advertising and promotion (calling radio stations, music journalists, etc.); a sound engineer, who puts in a lot of hours, since he has to be there not only during the show, but also during 2-3 hours of sound check; plus, someone has to actually book the bands; and, oh, probably a bunch of other things I've forgotten at the moment.

Even if we're lucky and have enough bands coming to us that we don't have to actively seek them out, someone still has to put in a lot of telephone hours with each of them, if only to determine whether they sound like they have their shit sufficiently together that they'll actually show up. And of course if we wanted the criteria to be a little more exclusive than "these guys sound minimally responsible" -- like, if someone is expected to actually listen to a demo CD first -- that takes even more time and effort!

It's one of those "spend money to make money" situations, where if we were to hire another person or two to do nothing but book bands, we could probably get national touring acts on a more regular basis; but we don't have the money to hire those people. Also, it's not a coincidence that most touring bands play at venues that are 18+, not 21+ as we are.

But there I go talking myself out of it again.