We rented a new compressor for a little while, and the webcast problem doesn't seem to have recurred, so I guess the old compressor is flaking out. 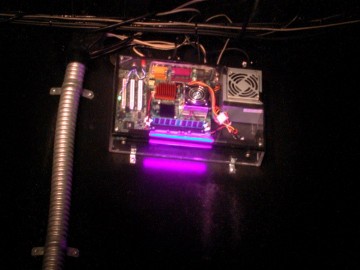 Jonathan replaced one of the kiosks (the one by the main door) with a new model. Thanks to the wonders of Moore's Law, this kiosk is now the fastest machine in the club. It's a 1200MHz Athlon, and even though it doesn't have a real video card in it (it's using the SVGA/VESA driver) it still runs the screensavers fast enough to look reasonable, and it boots really fast. This is the prototype, so it took a while, but we'll be upgrading the others as they break, or as funds materialize. It cost about $400 total; the other kiosks (which are ~200MHz) cost about $250 total when we bought them two and a half years ago. Jonathan didn't like any of the case options he could find (they were either too large, insufficiently ventilated, or too expensive) so he built a custom case out of plexiglass. And, since the case is transparent, I insisted he put a blacklight inside it! Now it's all tricked out, like a Honda Civic with a rear spoiler and neon ground-effects. All it's missing is a bunch of stickers with "performance parts" manufacturers on it, or perhaps Calvin peeing on a Raiders helmet.