The Beyond the Pale shows were really great. Pictures will be up eventually, once Angela gets around to scanning the 16 rolls of film she shot. If you were at the show, you may have noticed that the stage was bigger: last week, David built some removable side extensions, so that we can make the stage be about 8' wider overall. Since we had four bands' worth of gear on stage each night, this helped a lot...

Tonight we had a different kind of event: it was sort of a vocal recital for a music school; the graduates each did a short performance. I missed most of it, but one of the bits was a girl doing the Josephine Baker thing, wearing a skirt made of bananas, with accompaniment from a fellow dancing in a gorilla costume. That was great.

Later this evening we were sitting around watching a movie, when Ron spotted someone tagging our door. So Barry and Big Dave followed them down the street and caught up to them before they got in their car, and convinced them that it would be a good idea for them to come back and clean up their mess. "Yo, it's not like it's yo house or sumpin', yo," said the scrawny suburban white boy.

Here are some pictures of the little shit-worm vandal scrubbing his handiwork off our door. 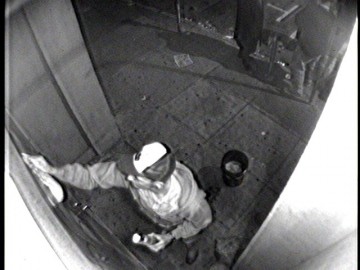 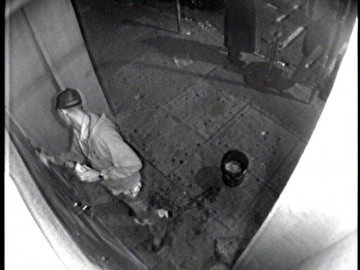 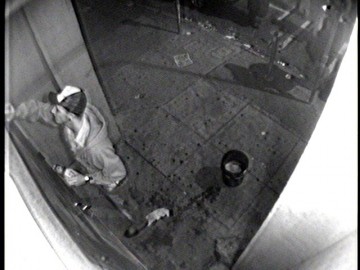 Personally, I was in favor of having his legs broken instead, but that's why I let other people make those decisions.

Barry thinks that the fact that we didn't have them arrested means that they'll be less likely to tag us in the future. I think he's delusional. These little Beavises are all mentally ten years old: instead of carving "fuck" in their school desk, or pulling the legs off spiders, now they're spraypainting their name on other peoples' property. Same shit, different day. I don't think you can reason with someone so developmentally stunted. 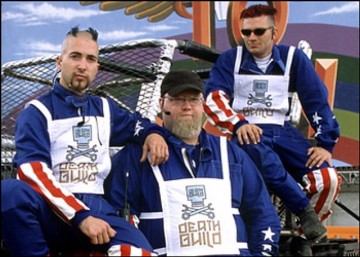 Speaking of Big Dave, you should all watch Full Metal Challenge on The Learning Channel on December 1st (10pm and 1am ET/PT). He and the Death Guild crew went to England and built a "Mad Monkey." There are pages for the Death Guild team on the FMC site and the the TLC site.