Well, it turns out we didn't have line of sight to UnitedLayer after all: apparently the sporadic blips of connectivity we were seeing were echoes, and weren't reliable enough to actually get packets through. We were actually getting the best signal when we were pointed directly at the brick wall behind the club: presumably the signal was bouncing off the building on the other side of the street, or something.

But, we discovered that we know someone who lives on the top floor of the apartments next door, so tonight we mounted the dish up there! Once we got up on that roof, we saw the true hopelessness of our previous situation: there were dozens of buildings in the way, even if we had managed to get over the wall behind DNA. But, from atop the apartment building, we've got a clear shot.

Moving the dish up there means another 260+ foot ethernet run, and it means the wireless hub had to go outside, inside a tupperware box strapped to the dish mount. Which means we need to get power up there somehow: we're doing that by running power over some of the unused wires in the ethernet cable. This about as sketchy as it sounds, because there's significant resistance in that much copper. We still need to get a different power supply to drive the hub, since we need to push more voltage down the line to make up for the loss. (Looks like the 5v power supply needs to be cranked up to 9v.)

But, before starting all this, we brought John's telescope up to the roof and confirmed that we have line of sight this time by looking through it and seeing Tom waving back at us. (That was pretty neat.) So it looks like it's going to work this time... Tomorrow, we obtain and hook up the bigger power supply, then figure out how to actually get a bridge running across the two dishes, then figure out how to actually route our packets over that bridge...

This had better work, because XO is still fucking us over about the T1, and we're something like 17 hours away from the deadline when the club goes dark. So if the webcast stops in the middle of the Halloween party, you'll know we didn't get it working in time.

Here's the dish in its new position, and here are John and Jonathan working on it in the middle of the night: 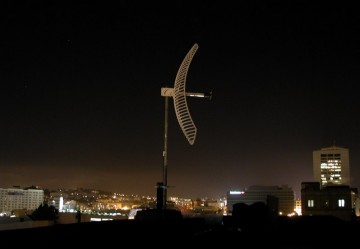 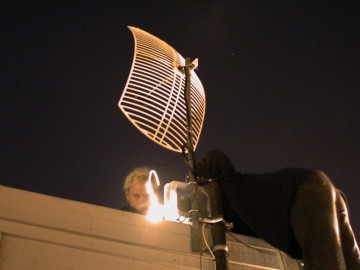 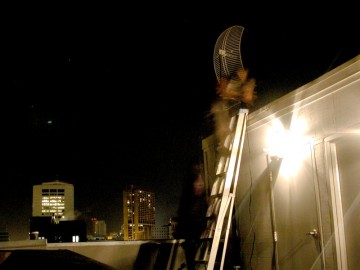 Here's a shot of Eleventh Street from Really High Up (the motorcycle parking in the bottom left corner is in front of DNA's north door.) And, here's a shot of the location of the other dish we're trying to hit, as seen from our dish. The large version of the photo has a target painted on it: at this scale, the dish we're trying to hit is less than a pixel tall. I think one pixel corresponds to about five feet on the roof of the target building! 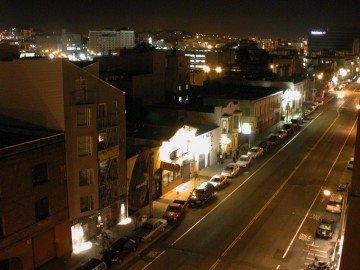 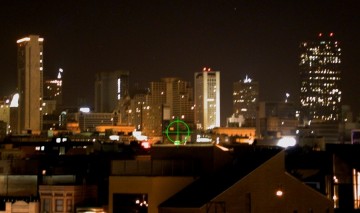