Last week, our center speaker cluster became our center speaker. We really didn't need that much muscle up there just to take care of the balcony, so we took two of the speakers down to use as side-fills on the stage. We had been using our live-show stage monitors as side-fills on dance nights, and hauling them up and down every time we had a live show, so this is a lot more convenient.

I think the center speaker looks kind of goofy now, though, all by itself; with the other two in place, it looked much more substantial; now it's just kinda sticking out. We can't turn it sideways because of the angle the sound comes out of it, so it is what it is... 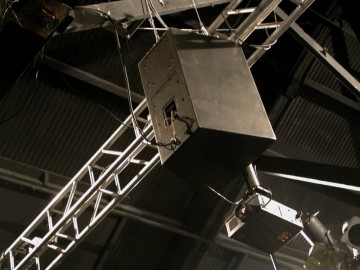 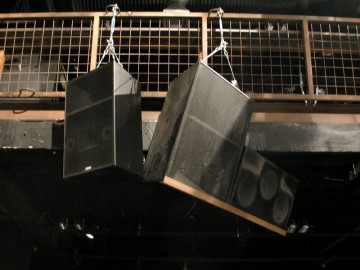 To hang the side speakers, some new mounting points had to be attached to the railings. The welder did this by detaching two old mounting loops that were no longer needed, and welding them back on in the new spot. Check out this quality fucking workmanship. Sure, we've got sharp little nubs sticking out where the old mounts used to be, but that's "good enough", right? Sure, all the other mounting loops are in line with each other, at exact right angles from the railing, but having the new ones be ten degrees out of whack is "good enough", right? This was, of course, not the same welder who did all the other fine metalwork in this place: he never would have done something so halfassed. I mean, I sure these out-of-whack mounts are strong enough, and I'm sure that just about no one but me would ever have a chance of noticing this, but we put a lot of attention to detail in this place, and every time I see it descending into the same level of half-assery by which other clubs work, it drives me crazy. The only reason this place isn't the same kind of dump it was before we remodeled it is that we obsessed over details like this, dammit! 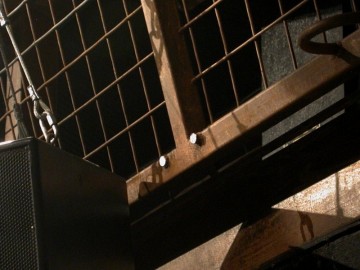 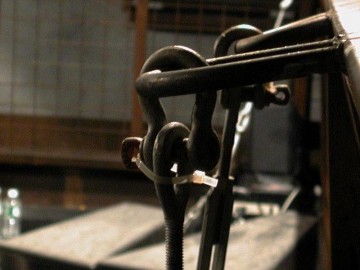 Anyway, moving along to the nerdier news...

Last week, Jonathan got XO (the folks we have our current, about-to-pumpkinize T1 circuit with) to agree to have us up and running with a new circuit by Nov 1. We have it in writing. Today he finally got through to one of the XO monkeys on the phone again, and found that the order went in today -- while he was on the phone. So they're totally on track for getting us that new T1 in around 17 days. Which is either Nov 12, or Nov 19, depending on whether they meant "days" or "business days", which leaves us dark for around two weeks. Pigfuckers! They don't even have to send someone out to make this change, it's all software.

Meanwhile, Plan B is looking more promising. Other-John put a dish up on the roof of UnitedLayer and pointed it in the general direction of DNA, and today he brought the other dish over to the club and we hooked it up. Our original plan was to bolt up a 20' pole at the back of the building, so we can see over the building next door. John brought a pole, and Jonathan and I made like Abbott and Costello lugging an extension ladder up three flights of stairs and out the roof hatch. But, it turns out we didn't need to -- we have line-of-sight to the other dish from the front of our the building at roof level, so we only needed a 4' pole! This made things a lot easier, since, among other things, it meant the hub could go inside the building, instead of inside a tupperware box strapped to a pole 20' in the air. We actually got connectivity between the two dishes today on the first try. It's pretty crappy signal strength, though, because (we think) the other dish needs to be angled down a little to point directly at the club.

After we saw that it was probably going to work, we did another run of ethernet from the back office (where all the computers are) up to the front of the building, which is just about the longest distance it's possible for a cable to go in this building without looping back on itself; I think the run is about 200'. And as long as I was climbing around in the rafters getting dirty anyway, I did two runs, so we were able to move the Airport (wireless hub) from the back office to basically the peak of the roof at the front of the main room: so if you're ever pathetic enough to bring a laptop into the club, you should be getting much better wireless connectivity now. 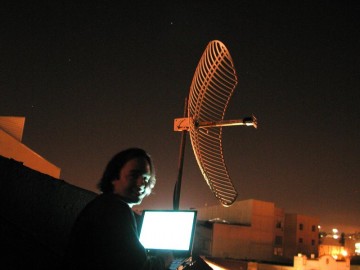 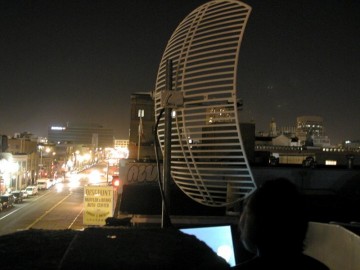 We were still messing around with the dish after dark, when the club was open. So at one point, John and I were picking our way across the steeply-angled roof, and he said, "wow, this is so much like being back at Burning Man: it's dark, it's cold, we're filthy, we're trying not to trip on something and die, we're out here with a laptop trying to debug the network, and there's loud bass thumping from somewhere nearby." It made me nostalgic, it really did.