I've been kind of lax about updating lately, I know... What happens is, it gets near the end of the week, and I think back and say to myself, "eh, nothing really happened that's worth writing about." Then I finally sit down and force myself to start typing, and one of these 700+ word giganto-entries like this one comes rolling out.

At the Adam Freeland show, someone brought in a giant boombox. And by "giant" I mean "filled the whole stage!" It's an easy guess that this was something left over from Burning Man, but it was exactly the right size for our stage: it looked like it had been built for us. The DJ stood in the place where the cassette door would have gone, and the VU meters above him were actually hooked up to the mixer, so they were accurate. It was pretty cool. I didn't have my camera with me that night, so here are a few shots I pulled off the webcast (mostly taken after closing): 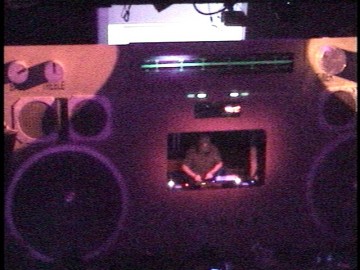 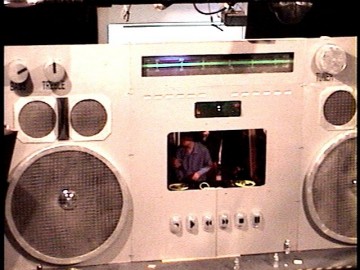 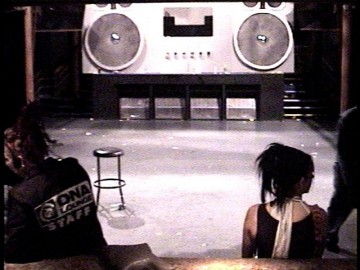 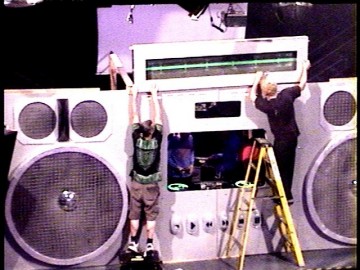 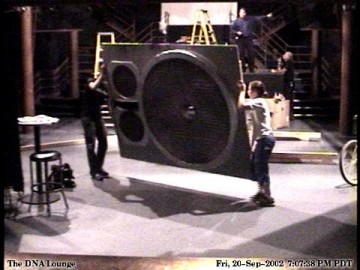 We got new bulbs for all the intelligent lighting, and this combined with the fact that our hazer is working well again means that the lights have been looking really good lately: I guess they'd been growing gradually dimmer, because it seemed like a pretty dramatic difference after the bulbs were replaced. (Nice fact about intelligent lighting: it's a bad idea to wait until bulbs burn out to replace them, because they tend to fail catastrophically (i.e., explode) and damage the light.)

We've been having the usual assortment of computer troubles:

I put up some photos of thursday's Capacitor performance. It was super cool: if you missed it, you have three more chances, since it's happening every thursday at 8pm until October 24th. There was a review of an earlier incarnation of this show in Wired a few months ago.

We've got a few special events coming up that I'm looking forward to:

Let's see, what else is new... We've got a new weekly friday event, Remedy, and it seems to be going pretty well. By which I mean, there are a lot of people. It's basically the same crap house music as most of our weekend events have always been, though I'd have to say that this one seems even a little more unabashedly disco than OM and Melon, which I wouldn't have thought possible. The crowd seems a lot more mainstream too. But, that's offset by the fact that they hire the Go Go Pro dancers every week, who always have really creative costumes (and do things like stilt-walking, etc.)