<< Jul
Sep >>
DNA Sequencing
with your host
Jamie Zawinski
Support DNA Lounge!
Your donation helps ensure that we can continue bringing you the kind of awesome, eclectic and weird events that you've come to expect from us! Your donation keeps us independent, and lets us continue to take chances on the kind of local live entertainment that makes San Francisco great. Won't you pitch in?
To support us on a monthly basis, please subscribe to the DNA Lounge Patreon!
12-Aug-2002 (Mon)

There are some pictures of the Thunderdome benefit up. Capacitor put on a very cool show: two dancers on stage controlled pulleys while the third zipped around through the air above the dance floor!

As of last thursday, we now have Rockstar on the soda guns now instead of in cans. Barry gave a bunch of people blind taste tests to see if they could tell the difference between the can and gun versions. He'd pour three shot glasses of it, with one kind in one cup, and the other kind in the other two cups. I think David was the only person who got it right. Everybody else had very strong opinions about it, but they were all wrong. Personally I don't even pretend to be able to tell the difference between any of those "energy drinks." People claim they can tell them apart, but to me they're all caffinated syrup. Not that there's anything wrong with that. But it's kind of like drinking gummy bears.

DNA Vocabulary Watch: the staff's favorite word recently has been "cropdusting." That's when someone walks by you leaving a putt-putt trail of farts behind, so you're left standing in their scent. Apparently this is a common problem suffered by the folks working in the box office.

As I write this, the Body Manipulations show has just ended. There was an aerial rope-dance; a contortionist; a guy balancing on top of a straight (non-free-standing) ladder while cracking jokes and juggling torches with a plastic bag over his head; a guy doing handstands on top of a stack of four or five chairs; and a "happy chef" who managed to get twelve plates spinning atop twelve different sticks! Quite impressive and very funny. They ended with a bait-and-tackle show where a fellow dangled from meat-hooks in his back, but that's really not my thing, so I just listened to the audience cringe instead. Also they -- absolutely free of charge -- were branding the number "13" into anyone who wanted it. Which turned out to be almost 10% of the audience! (Kids today.)

All in all, a great show. A fun weekend, really: we had four consecutive days with not only no house music, but also four events that I would attended even if they weren't at our club! That's cool.

Photos from the Body Manipulations show are up now!

Here's an icky piece of trivia I heard: apparently, after the suspension act was finished (the one where the guy hung by meat-hooks in his back) his assistants spent a while squeezing his wounds, to get all the air out from under the skin. Because apparently if you don't do that, the air bubbles will settle in your neck and give you a nasty headache for several days. So keep that in mind the next time someone hangs you from a hook.

I moved the machine that runs the audio webcasts into colocation with a new ISP (United Layer) who offered me a better price on bandwidth. This means that for the same cost, we should now be able to support a lot more simultaneous listeners. So, please let me know if you experience any problems!

The Nina Hagen show this Sunday sold out today! We've had a bunch of out-of-state ticket sales for that one, too. Apparently she's only doing six U.S. dates.

Our alarm went off this afternoon when nobody was around, resulting in a gun-drawn visit from the police: 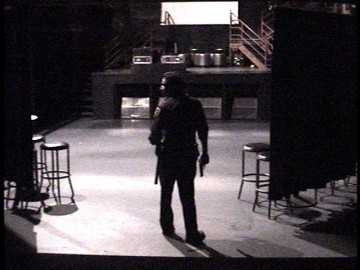 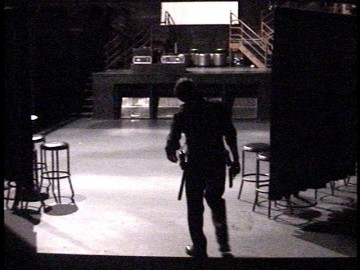 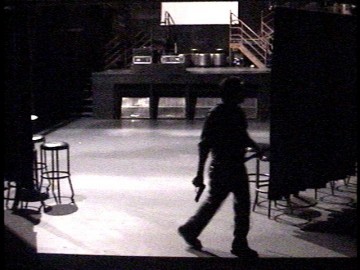 (Nothing appears to be missing.)

Wow, what a week!

Photos from sunday's Nina Hagen show are up now. That show was just amazing. She's one of those people who is fascinating because she's so Unlike Others -- it seems like her show is mostly just, her being her. Watching her cook dinner would probably be almost as captivating as watching her sing with her band. It was a great show: she'd go from operatic highs to that scary devil-voice she does in the blink of an eye, the whole time mugging and being generally Nina Hagen-like. If you didn't see this show, do not miss her the next time you have the chance! I would not steer you wrong on this one.

It was, of course, a wonderfully odd crowd. The majority were fairly uncategorizable freaks, but you could tell that even the most normal-looking people there were still the weirdest people at their day job.

She has some quite devoted fans. The first two folks in line were a couple who had traveled from Texas to see the show -- they showed up to start waiting at 3 PM. We also got faxes at the club addressed to Nina from people who couldn't make it to the show, but felt the need to write her a letter!

Then tuesday was the Pete Rock show. The headliner was just a dj and didn't impress me, but the opening acts were very cool: hip hop isn't usually my thing, but I always appreciate any display of skill, and these folks had it. The best bit was these two guys called Soulati and Infiniti who did the best beatboxing I've ever heard: it was just two guys with two vocal mics, and they sounded exactly like djs. I had to watch them for a few minutes before I believed there wasn't a record playing too, because it was hard to believe that those sounds were coming out of human mouths: "that's a drum machine! That's scratching! That's a record spinning backward!" But no, it was all done with voices.

It starts at around 10:50 in the archives if you want to check it out. Though it sounded more convincing in person than it does in the archive: I guess the subwoofers helped.

After the show was over, some dumbass, who had just gotten thrown out of the club for, I dunno, being a dumbass (I think he threw a beer bottle or something), decided that as he was walking away from the club, he'd throw a punch at the plate glass window next door (the former pizza place, currently closed for remodeling.)

He broke the window, and sliced his hand open. Then he panicked and started running. So our security chased him down, wrapped up the fountain of blood coming out of his hand, and called the paramedics. So he went to the hospital, and then to jail. 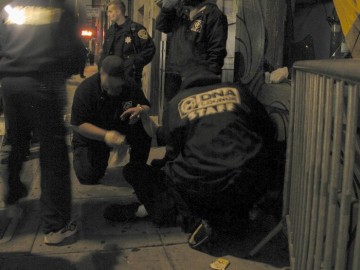 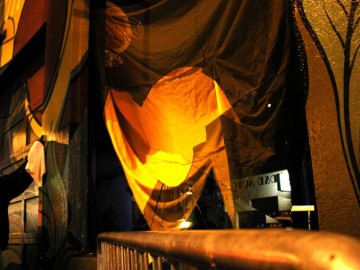 Of course, this left the restaurant with no window. And Georgia, the new owner, is already in the desert for Burning Man. John has keys to the place, so we called him to have him bring them down (dragging him away from his girlfriend's birthday party!) He went a step farther than delivering the keys, though: he managed to round up plywood and a circular saw at 3AM! Here's John and Lucci patching the window. 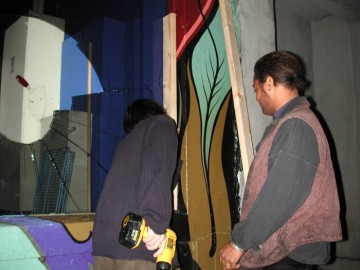 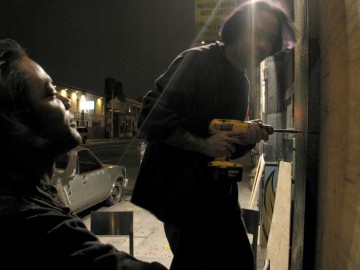 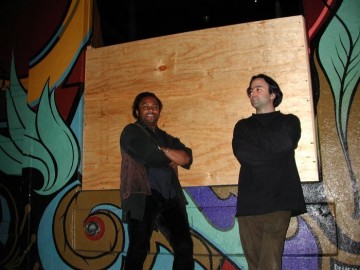 There weren't too many people at the Sea Snakes show, but there were enough that we came out a little bit ahead -- that is, until we suddenly found ourselves needing to pay for a window. Factoring that in, we lost money on the show. Thanks, dumbass!

Also, her notification of liquor license application (which had been taped to the window) got lost in the shuffle, so we also had to send someone down to the ABC to do the paperwork dance to get a new one...

Then on thursday, the following night, was our EFF Benefit, with Wil Wheaton versus Barney Celebrity Boxing. It was great! But I'm tired now, and will write about that later...

Have I mentioned lately how pleased I am at the amount of variety we've had at the club over the last few weeks?

Photos from the EFF party on thursday are up now. This was a benefit for EFF's Campaign for Audiovisual Free Expression and their Chilling Effects Clearinghouse. If you don't know who the EFF are, they're essentially the legal division of the free software world. They're a donation-funded organization who oppose bad laws and organize legal defenses for hackers and other internet users who find themselves victimized by corporate lawyers.

So, we threw a little party to raise some money for them, and it went great! Lots of people showed up. At around 11:30, a few folks made speeches about why we were there. Wil Wheaton's speech was really good, and you can read it on his web site (he posted it that morning, and just after he started in, someone in the audience shouted, "we've already read it!")

Apparently he was on TechTV talking about this earlier in the day, but I missed it: if any of you happened to tape that, I'd like to see it! (They seem to have a video clip of it on the site, but it's in some Windows-only plugin format that I can't play, since I live in a Microsoft-free world.)

Sherri Steele gave the background on the whole Barney thing. ("Yeah, why Barney?" you might be asking, "isn't that kind of 1996?") In case you don't know, the Barney lawyers started sending nastygrams to everyone who did a parody of their annoying purple property, and they send such a lawsuit threat to the EFF themselves, because for a while, EFF was mirroring a zine that included a parody of the Barney song. EFF's reply to this nonsense was part of the genesis of their Chilling Effects Clearinghouse.

Then the boxing match!

Barney "The Cretaceous Killer" Dinosaur and Wil "The Crusher" Wheaton enter wearing towels around their necks, doing the usual pre-match mugging. Rocky Theme. Barney Theme. The referee calls them out and gives them the rules: no ear-biting, no nose-rubbing, no tail-humping. Much cheering, much booing.

Round One! Barney refuses to fight! He shakes his head, he asks for a hug! Wil pops him one, but feels bad, and tries to make peace. Of course Barney hits him, Wil goes down! Barney kicks him! Bell sounds! "We Will Rock You" plays.

Round Two! Blows traded, Barney goes down like a preacher's daughter! Some lovely lady on the balcony tosses Wil her panties. Wil grabs Barney by the tail and swings him around. The ref breaks them up. The fight continues. Barney's down again! Barney's lawyers started running around handing cease and desist letters to the audience! (I didn't manage to save a copy of one of those, but they said, basically, "stop making fun of our client!") Barney gets up at the seven count. Bell sounds! "Rock and Roll" by Gary Glitter plays.

Round Three! Not long after the round starts, Barney's thugs hand him a light saber! Hot franchise-on-franchise action! Wil tries to defend himself using a big plastic penguin (the Linux mascot.) Then John Gilmore, dressed in a bathrobe (which I gather was supposed to be an Obi-Wan Kenobi costume) appears and provides him with his own light saber.

And Barney is down for the count! Barney is beheaded! Barney's lawyers pick his pockets and run. Bell! "Eye of the Tiger" plays. The crowd goes wild.

Apparently the guy who punched out the window last week left a note offering to pay for the damages! Good for him! It's so nice to see people taking responsibility for their actions.