I keep hoping that one of these days, I'm going to be able to just sit back and enjoy a show at DNA, without spending the whole night stressing out about it.

Well, all things considered, the KMFDM show on monday went pretty well. I was far more nervous about this show than any previous event we've done. It was so much work to set up; it seems like every time I saw Alexis, he was trying to nail down some other detail of it. I just kept bracing for disaster: to find out that an hour after doors, the band decided to cancel for some reason or other. But no, they played!

It wasn't until Kidneythieves and 16 Volt finished, and KMFDM actually started playing that I was able to settle down, and convince myself that yes, everything was going to be ok...

The only real hassle I had to deal with was that half of the video on the webcast was missing during the Kidneythieves set, because KMFDM's video guy had decided that he'd just go ahead and re-use one of our webcast cameras for his own purposes. (I noticed in time that it wasn't turned on, but I didn't notice that he'd also moved where its video was routed!) I'm going to have to make the "Don't Touch" sign on that camera even ruder.

Oh, then one of the big-ass monitor speakers up in the DJ booth fell on me. Apparently some time in the last few weeks, someone broke one of the legs off of the tripod that it sits on, and instead of fessing up, they just left it precariously propped there for someone else to discover the hard way. Jackass. We're lucky it fell in instead of out, or it could have killed someone.

Anyway, it was a good show. All three bands put on energetic performances, and there was very little in the way of recorded backing material. (I'm a sucker for seeing people on stage who are actually playing instruments!) The crowd was really enthusiastic, and enough people showed up that we broke even.

But I must say, this was the worst sounding live show we've ever done. That was a real disappointment, and it's pretty obviously because the band insisted on using a lot of the gear they were traveling with, instead of the club's sound system. So we ended up with this Frankenstein hybrid sound system that had been installed and tuned in one afternoon, instead of our in-house system which was designed for this room from the start.

I think a lot of it was an attitude like, "we're not driving this 18-wheeler around the country for nothing, dammit, we're going to use it!" This was certainly true of the lights:

I assume a similar set of conversations happened about each piece of the mountain of sound gear. It took Alexis weeks to talk them out of bringing in half a dozen VW-bug-sized subwoofers. I don't know where they expected to put the audience with all the gear they wanted to bring in.

It's pretty ironic that, when these bands travel with so much gear (presumably in an attempt to live out their Van Halen rockstar fantasies of 80' speaker stacks on 200' wide stages, with flight-harnesses and Stonehenge dropping from the ceiling and whatnot) what happens when they play non-stadium venues is that there's so much gear on stage that none of them can move! They want to feel they have a big show, and it results in them not being able to shuffle two feet from their assigned spots. Whereas bands with more realistic (and no less loud) amounts of gear have plenty of room to run around...

They ended up using their own mixing console instead of ours, which they had to put in the corner under the main stairs, because it was like 10' wide and 800 pounds, and there was no way it would fit up on the catwalk where our mixing console normally lives. So I don't know whether the problem was their extra speakers, or that their console was crap, or that their sound guy liked the sound of muddy vocals and constant clipping, or what. But it sounded like ass.

That didn't stop them from working the crowd, though: from watching the crowd move, it seems that everyone was really into it. I just wish they had trusted us a little more, and given us the chance to make their show sound good as well. 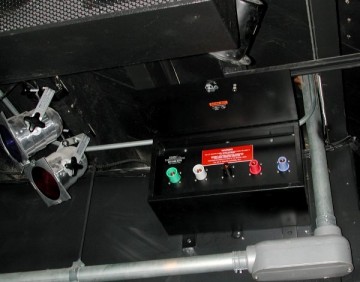 To accommodate their lights, and all the extra speakers they brought on stage with them, we had to re-route some electricity. Since we've had to do this before (to make VNV Nation's light show work), and probably will again, this time we did some more permanent work to make it easier: we had one of those fancy-pants high-amperage plug sockets installed above the men's bathroom. (Please do not lick.)

Hassles aside, it was a good time, and it's always great to see live music happening here; that's the whole point, after all!

Check out the photos...