Last week, Jonathan hooked up some LEDs to the kiosks to illuminate the keyboards. I think it made a huge difference: you can actually see the keyboards in the dark now. The black keyboards are cool, but sometimes I forget that not everyone can touch-type... He these blue LEDs (two each were needed to hit the whole keyboard, since they throw a 30 degree beam), and he made little enclosures for them out of plastic pipe-ends. They look cool, and seem pretty solid, too (a key point, given the kind of barbarians we have to deal with.) He got the 5v power for them right off of the CPU's power supply, and just ran another pair of wires down through the flex conduit to reach the monitor. 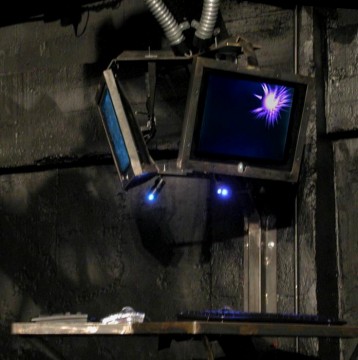 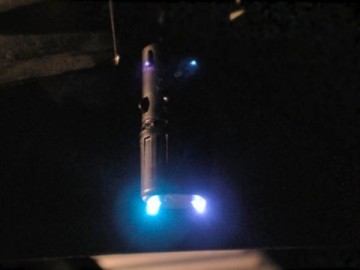 Danfuzz and I spent yesterday hauling televisions around. Wait, back up. Last month, a few of us headed over to the Alameda County Computer Resource Center and dug through piles and piles of used televisions. That place is amazing: it's a huge warehouse that goes on forever, and is just filled with crazy, obsolete electronics. They have pallets of computer monitors that are saran-wrapped together and moved around with forklifts. It's definitely worth a visit, if only to wander around in amazement at all the stuff people throw away. I kept alternating between thinking "wow, look at all this great stuff!" and thinking "wow, look at all this useless junk!" Barry said, "this is a lot like being at the club during remodeling. Except their remodeling job will never end."

Anyway, after spending a day sorting through and testing piles of televisions, we came away with a dozen or so that mostly work. So yesterday, Dan and I took stock of the various TVs tucked into corners around the club, figured out which ones work, and shuffled things around. We had to abandon a few of them because they have this irritating feature where they stay off when power drops and is re-applied: so if you're turning them on and off from a power strip, as we are, you'd also have to climb up and turn some of the TVs back on by hand, which is too much hassle. I'm told this is some legally-mandated "energy saving" feature. Maybe it will be possible to short across the power buttons to avoid this on some of them. We'll see.

So most of the TVs looking down on the lounge display pictures now, and there's a new stack of them under the main stairs in the main room. I think it worked out pretty well! 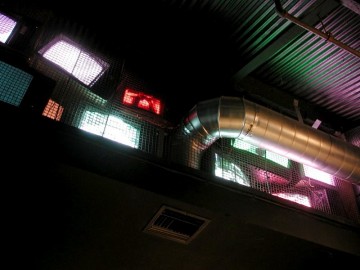 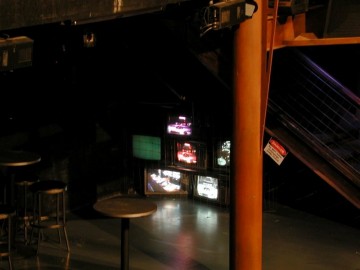 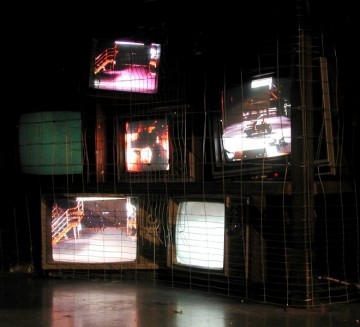 We were planning on putting a row of TVs under the balcony downstairs by just setting them on top of the deceptively shelf-like plumbing and electrical conduit that runs the length of the room near the wall, but it turns out that (surprise) TVs are actually kind of heavy, and the way those pipes were flexing was just a little too nervous-making for comfort.