On friday there was actual, full-on break dancing at the DNA. I mean we had a guy with an enormous afro spinning on his head and everything. That was not something I ever expected to see again. Plus a contortionist! And we didn't even hire these people! 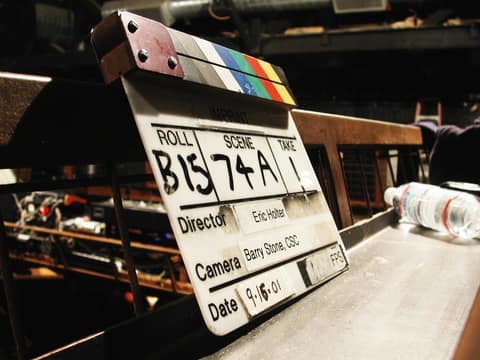 This sunday we had a film shoot here at the club. It's an independent short (they're guessing it will end up being about ten minutes long) called "Imprint," starring Alessandro Nivola and written and directed by Eric Holter. It's a story without dialog, set to music (which the director also wrote), about a guy dealing with the death of his sister. The bits they were filing at the DNA were during the "raves and drug use" part of the story. It was pretty interesting watching them do this. They dressed up various parts of the club in different ways, to let DNA play the part of a bunch of different clubs in close-ups. Later in the evening, they brought in a bunch of extras and staged a dance club scene in the main room. And, of course, I took some pictures.

I'm not sure when we'll be able to see the finished product, but they said that they're going to be submitting it to a number of different film festivals later this year.

Coincidentally, today I saw the video for "Insane in the Brain" by Cypress Hill, which was filmed at the DNA Lounge in 1993 or so. I'd known for a while that this video was filmed here, but I hadn't actually seen it again since I learned that! The most distinctively recognisable feature you can see in the video is the shape of the railings on the stairs on either side of the stage, but there are some brief shots that show the balcony as well.

It looks like the non-concert parts of the video were filmed upstairs in the lounge, before the previous owners had painted over the Keith Haring murals. The walls and ceiling of the lounge used to be covered with a twisty black-and-white psychedelic maze (picture this painted on a wall instead of Grace Jones, and you'll get the idea.) We uncovered bits and pieces of the mural while we were doing demolition in the lounge (taking down shelves and so on) but never enough of it to save. Who knows what posessed them to paint over that thing! Especially with the really amateurish faux-middle-eastern thing they replaced it with.