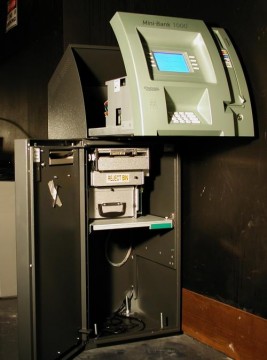 We got our ATM. It's bolted to the floor, so don't you get any ideas! There's not much inside it: it's basically a floor safe with a screen, a circuit board, and a bill dispenser. The dispenser is interesting, though: it's got a "reject bin" where it dumps bills that were in its cartridge, but that wouldn't make it through the dispenser for whatever reason. Interesting ATM trivia: they deduct money from your account based on how many bills they saw leave the slot, not on what you typed on the keypad. So that means that if for some reason an ATM doesn't spit out enough bills, or spits out too many, you still get charged for what left the machine. These guys thought this through! That's so rare.

Frederick figured out how to get audio working passably well in the RealVideo stream. It's strange: if we tell RealProducer to encode both audio and video, then the audio comes out sounding really choppy. However, if we run two copies of RealProducer, one doing video only, and the other doing audio only, and we send both of those streams along to the server, it works much better. (This probably means there's some bogus blocking going on in one of the device drivers, as the machine only has one CPU.)

An unfortunate side effect of this is that we had to change the way the clients connect to the stream: there used to be a .ra file that pointed to one stream on the server that has both audio and video in it; now, instead, there's a .smil file that points to the two streams. But the interesting thing is, the RealPlayer client seems to be smart enough about this that it realizes they're both coming from the same host and only opens one connection.

Anyway, this means that you might have to update your .mailcap file to know that you need to do "realplay %s" for content-type application/smil with extension smil. (Hopefully the RealPlayer installer has already done this for you.)

I'm told that a foot long concrete plug has been extracted from the floor drain in the women's bathroom. I guess we'll find out tonight how well that extraction went...