Want to hear the music that was played? Check out the webcast archives.

Friday and saturday nights were a blast. The music kicked ass, the crowd was friendly, and they danced until after 4AM! One of the best moments for me was that first time when it was 2:15AM and there were still a couple hundred of people in here dancing: I spent six months fighting for that, and it was so great finally seeing it actually being taken advantage of!

We got a fair sized crowd on friday, but it wasn't packed; still, not a bad crowd for basically no advertising: we didn't flyer for that event at all. This was good, because it gave us a chance to start off a little slowly, on our first night where the general public was allowed into the building. Saturday was great, we got about twice as many people, and they stayed a lot later.

And, amazingly, we got the kiosks working in time! Jonathan, Danfuzz, and Frederick were an enormous help with this; we put a lot of hours in on wednesday, thursday, and friday running cable and screwing everything together. We finished just in time: we put the drill and screwdrivers away about fifteen minutes before we opened the doors on friday. A lot of people used them. From standing back and watching for a while, I could see that some people found them confusing, so I've got some ideas to improve usability that I'll be trying out over the next few weeks.

We've still got some definite plumbing and paint issues. The auto-flushers on the toilets don't seem to be working a lot of the time, and I'm starting to think that our contractor got us just completely the wrong paint for the dance floor: it's uniformly sticky all the way across the floor, even after we've mopped up. Maybe the paint reacted with the alcohol in the spilled drinks and is breaking down or something. 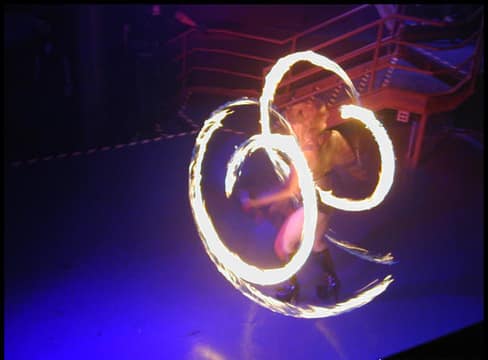 Jamie Nicolson took some really cool pictures of the fire dancers on friday night: check them out! I saw a bunch of people wandering around with cameras on both nights: if that was you, and you got any good shots, please send them to me, I'd love to include them here on the web site.

The whole staff commented that the crowd on saturday was really friendly. For example, when it was 2AM and it was time to go around and collect drinks (no alcohol after 2 in California), the customers would often thank the staff as they took their drinks away! That never happens, usually there's an argument!

However, on the other side of the spectrum, there was one slack-jawed fratboy gorilla there on saturday who was amusing himself by typing random characters on a kiosk keyboard as it was booting up, and then as soon as the desktop appeared, rebooting it and doing it again. I watched him do this for ten or fifteen minutes! I couldn't believe how long that managed to keep his attention. And every few seconds he'd glance back at his friends to see if they were watching. They weren't.

Later that evening, I saw that half the keys had been ripped off that keyboard. Gosh, I wonder who could have done that. I found all but one of them scattered around on the floor, and was able to re-attach them. Except that someone took Control. Or I lost Control, depending on how you look at it.

I expected to be replacing these keyboards with some regularity, but I didn't really expect it to be quite so soon. Oh well.