Still no love on the RealVideo front. It's starting to look like maybe there are actually two problems: we're getting an apparent frame rate of about 5 seconds/frame even when running everything on the same machine (not hitting the network at all!) I say "apparent" because the player claims it's doing 20fps, but the picture only changes every 5 seconds.

And on top of that, when we run over the network, it says it gets 95% packet loss. (There is no reported packet loss on the LAN.) And the picture is differently bad: when running on the LAN, it only updates every few seconds, but when it does, the whole image is there. But when broadcasting over the net, you see blocky compression artifacts too.

We've verified that we can keep up a continuous stream of TCP or UDP packets at sustained high bitrates for hours. So it seems there's little chance that the problem is with something upstream of us. It's looking more and more like the RealVideo software just doesn't work. I don't understand why it seems to work for other people and not us.

The kiosk enclosures are almost complete! The steel guys brought them in, but there were some things that weren't quite what we discussed (they didn't sufficiently enclose and protect the monitors) so they took them back to the workshop to add a few more pieces. So I think we're still on track for having those done for opening. (But just barely, as with so much around here!)

Frederick, Danfuzz, Jonathan and I spent the last two days hooking up the video cameras. We ran over 2000 feet of cable throughout the building! That took a long time, and all of us will be happier if we never have to crimp an F connector onto coax again in our lives. But we got a huge amount of work done this weekend: we have nine cameras mounted and positioned, and hooked into the video switcher, which is now in its new home up by the lighting control gear in the DJ booth (instead of in the back office.) So if you check up on the webcam now, you'll see it cycling through those cameras!

Here's Jonathan adjusting Camera 3, and a shot of what the video switcher looks like from the dance floor. That's actually the front panel of the switcher, with keypad and status display, but since the switcher will be computer controlled, we don't actually need to use the front panel. So we faced it outward, so that everyone can enjoy das blinkenlights. 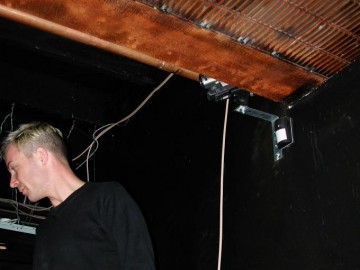 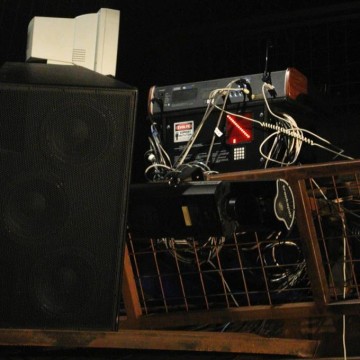 The plan is for these images to also be available on channels on a kind of private cable TV system throughout the club, so we can display those images (or images from any VCRs or other video gear we bring into the DJ booth) on any of the TVs scattered around the club. That's not working just yet, though, because it turns out that our cables runs are so long that we can't get away with doing this without also installing an RF amplifier. Which is obvious in hindsight, of course. So I spent today drawing schematics and doing the math to figure out how many dB of signal loss are incurred by the various splitters and cable runs in the system, to figure out how many dB of amplification needs to sit at the head-end.

I never realized that buying a nightclub would give me such a grounding in so many different careers.

We still need more TVs, though! I think we need at least a dozen more. Come on, people, I know you're out there: somewhere in your basement is a color TV that you haven't gotten around to throwing away yet. Let us give it a good home, and a second lease on life!

Per my predictions, the Glycol system did not "Just Work" as they promised us. Fortunately, we got the shipment of kegs early enough that we had a few days to let it just sit there, connected, waiting for something to go wrong before we opened. Which it did: somehow there is a leak in the coolant lines inside the beer pipeline, so even though everything is hooked up to the taps, we can't use them yet. It remains to be seen how long it will take them to fix this...

That makes us 2 for 2 on the pipelines: the soda/juice line also had a leak just after it was hooked up, dumping a whole carton of 7-Up syrup onto the pantry floor. It turned out that there was an extra, unused tube in the bundle, so they "fixed" that problem by just hooking up to the unused tube and abandoning the one that has a leak. I hope the beer fix is as simple.

We have really quite a lot of stock now: have a look at these pictures of our "liquid assets": the first picture is the second half of our first order. The second picture is a view from the inside of our walk-in cooler. Each beer line has two kegs connected to it (in series) and there's a third "cold-swap" keg ready to be switched in when those run dry. Next is a shot of the back wall of the main bar. You may notice that only five tap handles are in place right now: that's because Guinness hasn't been hooked up yet (it's from a different distributor, and has to be installed slightly differently, since it uses nitrogen instead of carbon dioxide.) 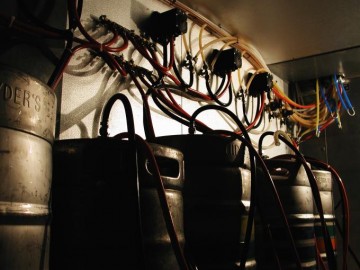 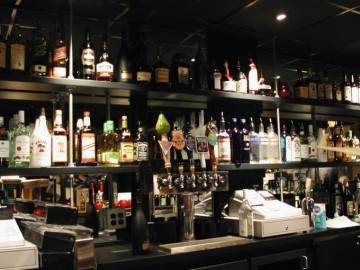