We had our "guard card" training last week. All of our security staff will be licensed security guards. This is something the cops want us to do, but it's not an unreasonable requirement, since it's really easy to get that license: basically all it takes is that you pass a test, and not be a felon. We had an instructor come down to the club and give the class and test to our staff. Barry and I got ourselves licensed too, just in case we need to fill in some day. We're also going to get everyone first aid training, etc., but we haven't done that yet.

The class was pretty informative, since mainly it was about the laws relating to Citizens' Arrest, which I didn't know much about. Security guards (and rent-a-cops of all varieties) aren't police, so they only have the same authority as private citizens; but private citizens have the right to arrest people for misdemeanors and felonies. Then you turn them over to the cops who are basically required to do the paperwork for you. If it goes to court, then the private citizen is considered the arresting officer. Kinda neat.

Security guards in a club situation have a little more authority than random other people in the club simply because they are employees: since they're acting as agents of the business/property owner, they inherit the rights associated with that (you have the right to kick people out of your own house, for example.)

I always find thinking about the security aspects of this business creepy and depressing, since it's all about the ugly side of things: situations that only occur when someone is being an irresponsible jerk. Of course, that's an awful lot of people.

So this was the second time in a bit over a year that I've been fingerprinted. The first time was when I got the liquor license, and now because I'm a licensed security guard. Note to self: wear gloves when doing crimes.

At some point during the guard training, some shitworm tagged our door. How's that for ironic? The only people in the club were a dozen security guards, and that's when Mr. "Shamrock Express" chose to autograph our building. He did it about a foot off the ground, too, so I guess he really is a munchkin of some kind. Sadly, the webcam didn't capture it, I guess munchkins work fast.

I decided where the various video cameras inside the club are going to go, now we just need to run cable to the positions, and figure out a way to mount the camcorders. I'm really not looking forward to this part: some of those locations are pretty inaccessible, and crimping connectors onto video cables is one of my least favorite things. 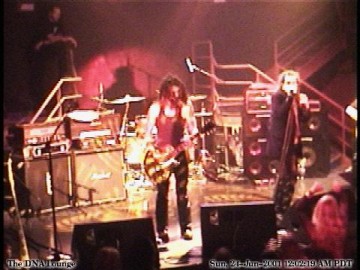 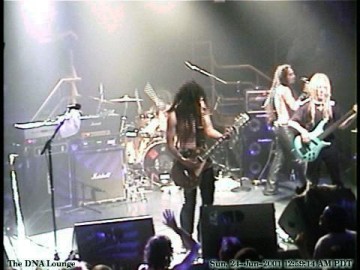 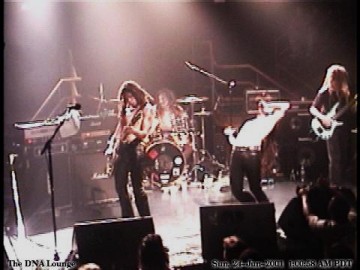 We had our first live band on saturday! SWARM. They rocked.

It was another guest-list-only affair, with most of the invitees being friends of the band. The door guys say a number of people tried to bribe their way in. Ha!

Sound check was on thursday, and that was just an amazing experience: it was the first time our new live system had been used by anyone. After having spent more than a year in here looking at plumbing and piles of dirt and sheets of drywall, to actually see real live ROCK AND ROLL happening on my stage was just a beautiful thing.

It sounded great, too. There were a few glitches that had to be worked out, since we hadn't actually tried this before, but it didn't take too long. One cool thing was that as they were doing sound check, the sound guy said, "it sure would be nice if we had a separate EQ for the subwoofers." And Greg went and made one: he hooked up his laptop to soundweb, dragged some lines around, and created an extra equalizer in the appropriate spot in the system. Then he made this accessible on SoundWeb's remote control display up in the dj booth: basically he added a "subwoofer EQ" dialog box to the UI that controls our sound system in just a few minutes. If we weren't doing all this digitally, that would have meant going and buying a physical equalizer, screwing it into the rack, and moving cables around.

The lights were amazing: I'd been thinking of the moving-fixture lights as basically being for the dance floor light show, but most of them can reach the stage as well, and the light guys used them to very dramatic effect.

We webcast the video portion of the evening, but not the audio, because I'm still missing some important pieces to tie my computers and the sound system together, and I didn't have time to figure all that out before the party.

We had a full staff on saturday, and went to 3AM (with djs after the band.) All three bars were operating. Pretty much the only thing we haven't tested at this point is the beer taps: we haven't yet hooked up kegs to the lines, since we don't want to crack a keg that then might sit there for a few weeks: beer goes bad. There were a few minor plumbing disasters (the balcony bar is leaking onto the main bar, one of the toilets stopped working, and we don't seem to have hot water at all.) And we've realized that we should have doubled again the number of electrical outlets. We did that already: we put in what we thought was twice as many outlets as we'd need. But we should have kept going. The biggest hassle that happened is that the cash register company set up our registers wrong, so the totals on the tapes are nonsense: this means someone's going to have to go through all the tapes and add them up again by hand. Fun, fun.

Every single surface in the building is now sticky. It's a real club now!