The rest of the live sound system was installed yesterday. We had been pondering how we were going to deal with cabling on the live sound board: typically when a band comes in, the sound guy will need to re-patch things at the back of the board, to decide which channels the effects units go on and things like that. But in our setup, the back of the board is hanging out in space over the edge of the dj booth, 15' above the dance floor, so it's a little inconvenient to get to. We were trying to decide between having a patch bay in the rack, and having some kind of swivelling table beneath the board. But then the board arrived, and even though it's huge, it weights nothing, so it's really easy to rotate around. The sound guys strapped the various cables to the back of the board in such a way that the cables won't get stressed by all the motion: the only part that actually moves when the board is rotated is the main bundle, and that's pretty indestructible.

Here are pictures of the front-of-house live sound board, the stage monitors, and the rolling rack that holds the EQs for the monitors. On night where there's a live band but only one sound guy, we can do 4 monitor mixes from up on the dj platform; but for bigger shows, there will be a second board set up to the side of the stage. This rack holds 8 EQs for those monitors, and also has a bunch of locking, foam-lined drawers where our microphones live. The monitor mixing board sits on top of the rack. 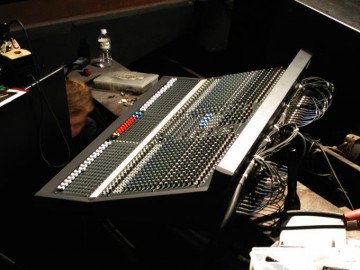 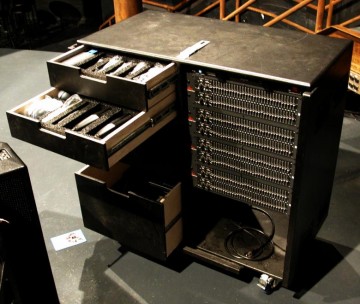 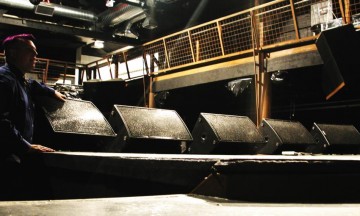 To the right is a picture of our lighting controllers. These are up in the dj booth, to the right of the dj station. The majority of the lights (the moving-spotlight Studio Spots, Technobeams, and Trackspots, plus the stage par lights) are controlled by the 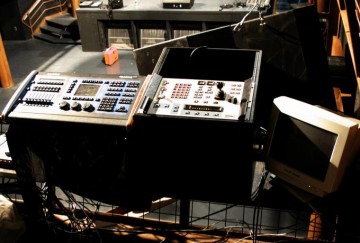 Whole Hog 500 controller (the blue thing on the left.) The Dataflash strobes have their own controller (the thin thing at the bottom of the box on the right.) The top right controller is for the Emulators (the coherent-light fixtures that do laser-like effects.)

The Hog can control the strobes, but I'm told that lighting guys prefer having a separate controller for them. The Emulators get their own controller because they're really old lights, and don't speak the same protocol that modern intelligent lights speak. You can get a board for the Hog that lets it control them too, but it's actually cheaper to have a separate controller.

The monitor on the right is attached to the Hog: it's mainly used for programming the lights; when operating them, the LCD screen in the middle of the controller is enough.

I've realized that I have a lot of software to write in the next few weeks, in order to make the webcast actually work from the club. It has to switch back and forth between "sound from the club's sound system" while we're open, and "sound from an archive" when we're not. And I have to archive it. And have a way to serve up the archives. And while the MP3/Icecast stream is fine, the RealVideo stream still doesn't have an audio component (Real's software blows, and I haven't figured out how to work around various irritating problems I've been having with it.) And all of this has to be almost completely automated, because I'm not going to have time to run back to the office and flip switches and move cables around every time something changes during operating hours.

This is what we call "just-in-time software." It's kinda like doing your term paper the night before it's due, but with higher stakes.

In better news, though, we got a quote back from our steel guys for building the kiosk enclosures, and it's very reasonable, so that means that they'll actually get done out of steel instead of wood, and done well!

Today the painters are back, putting another layer of clear-coat on all the steel. Oh, yeah, I forgot to mention: the rust on the railings and columns came out looking really good: it turns out that the clear-coat brings out a lot of detail that you couldn't see otherwise. That plus Angela's idea of doing strategic applications of rust remover to the more visible parts made it look really nice. I was very worried for a while: I was afraid that after all that effort, it was going to come out looking solid orange, and we could have just painted it if that was what we wanted. But now it looks pretty much how I wanted it to look from the beginning. Of course, it will usually be dark in the club, so most people will be totally oblivious to it anyway.

But I will know.