All that audio gear I enumerated above, and more, is now listed in great detail on the new Sound and Lights pages.

We had a party on thursday night! Our first dry run, where we actually charged people for alcohol! It went perfectly: we had two bartenders and a full security staff, and we had the music from the djs in the main room piped into the lounge sound system as well. Since we got the permits on monday afternoon, I wanted to have the party monday night, but there was the small matter of the sound and lights not being fully hooked up yet. 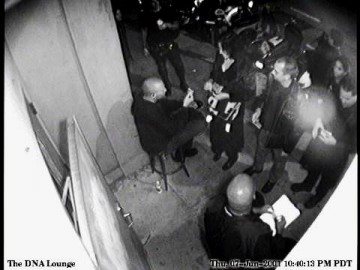 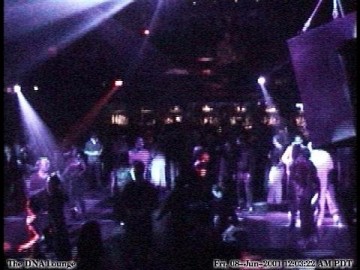 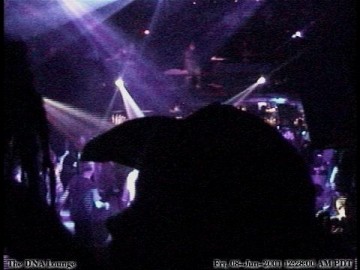 The security staff even carded my mom, so now we know that nobody is gonna be able to intimidate their way past those guys.

If you are offended that I forgot to invite you, I'm very sorry: please feel free to berate me, and I'll put you on the list for next time. (Unless actually I hate you.)

My favorite quotes from the party:

The webcam images from the party were a bit grainy; I'll need to play around with manual exposure settings on the camcorders to see what I can do to clean that up. It also became obvious pretty quickly that we need to keep auto-focus off, since the flashing lights really confused it.

I'm having a lot of trouble getting clean images out of the RealVideo stream. Ever since I started alternating between the interior and exterior camera (with the video switcher) the Real stream has just gone to hell: it seems to take like 20 seconds to reconstitute the image after the scene switches, even on a 1.1MB DSL connection!

I need a RealProducer guru! Do you know one?

The options I'm using can be found on my realproducer page, in the realprod-initd script and the realprod.conf file. Right now I'm telling it to target five different bit rates, and I've tried various other video-quality options with no obvious effect.

We still need more TVs! If you've got a junker TV that you're not using, we can give it a good home. Any size is fine (though smaller is better, since we have fewer small ones.) All that we require is that it be able to display a color picture. It doesn't matter if it's a good picture, but you should be able to see something. (It turns out that a bunch of the purportedly-working TVs people have donated to us really only display static: which doesn't make them useless, but does limit how we use them quite a bit...)

So if you've got a TV you're not using, we'd love to have it! We're here pretty much every weekday from noon to 7pm or so...

We stacked up a bunch of TVs in the entry hallway, behind the metal fence in front of the electrical panels, and it looks great. It's very imposing.

I put a couple of kiosks out at the party for people to play with. They were just duct taped down to tables, since we don't have enclosures for them yet: we're waiting to get a quote back from our steel guys about the things we want built to hold them. If that turns out to be too pricey, then we'll just build something out of plywood ourselves and get something classier later. (We've gone through a number of friends-of-friends who are like, "sure, I can weld" then never follow through with a design or quote. So I think that if we want it to be steel, we have to use the pros...)

Anyway, they weren't in drunkard-proof enclosures, but they were booting over the ethernet out in the main room, and nobody managed to wedge them (that I saw.) I'll definitely need to have them start up with some quick little dialog about "here is how this differs from your Mac; here's how you reboot if everything has gone wrong."

I'm also pondering ways to make it harder for someone to install a keyboard snooper on them, to capture passwords; I'd like to tell people "reset the machine before typing in a password and it should be fine," but the problem with that is, it takes GNOME like two minutes to start, so nobody's going to wait around for that. I'm settling for a script that, once the screen saver activates, kills off any unknown processes. I can think of ways around that, but it raises the bar a bit.

In other nerd news, the recession has once again been good to me: some friends' internet startup tanked recently (and for them I'm sad), but I was able to buy a bunch of used UPSes from them for $25 each! If I've done the math right, these should be able to keep the club's computers running for two and a half hours, which might even last us through the "rolling blackouts" they keep threatening us with this summer.