Ladies and gentlemen, boys and girls of all ages (but 21+), this is the moment you've all been waiting for.

The DNA Lounge will be reopening on Friday the 13th of July!

Last tuesday, at the last minute, we got our Special Inspections signed off. Barry then went down to the building inspector's office and camped out there until he arrived, and didn't leave until he had signed the paperwork, faxed it to the police, and verified that it had been received, just to make sure. Then on wednesday morning, Barry and our lawyer spent the morning on the phone, negotiating last-minute details of the exact wording of the stipulations attached to our permits.

At 1PM, we all went down to the far-too-familiar police hearing room, and reviewed a marked-up printout of the stipulations (covered with handwriting and crossed-out words.) I signed a piece of paper agreeing to the batch of stipulations that came from the noise abatement unit; and was to sign a blank piece of paper that they would then fill in with the actual stipulations, transcribed from the marked-up copy. Except that I didn't actually have to sign that one, because they had one on file from last year when we started this process! 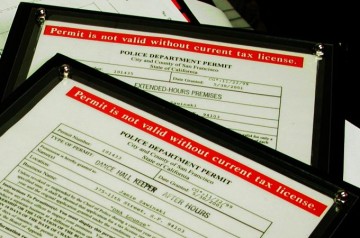 So on monday morning, Barry went down to the City Tax Collector and paid the permit fees, and brought the permits home! I'm now the proud permittee of "Place of Entertainment," "Dance Hall Keeper - Extended Hours," and "Extended Hours Premises" permits!

And with that, we've chosen our opening date. This gives us time to hire and train our staff, finalize things with the promoters we've lined up for our initial batch of weekly events, and start booking events for the rest of the summer and beyond!

We'll have more details about what our schedule will look like as we nail things down in the coming weeks.

In other news, our dj coffin has been delivered. We've had all the gear for some time now (it's what we used for the noise test, for example) but we hadn't seen the box that the gear lives in until today. Here it is:

It's huge, and weighs about as much as a real coffin (body and all.) The reason we have a coffin, instead of just bolting the gear to the dj platform, is so that it's somewhat mobile. Depending on the event, we might want to have the dj be down on the stage instead of in the dj booth. As you see, it's got three turntables (Technics SL1200-M3Ds.) The shiny controller in the middle is the mixer ( Allen & Heath Xone:62), and above that are the controls for the two CD players (Denon DN-2100F.) The CD drawers open from the front of the coffin, at about thigh height.

It has a lot of audio connections going into and out of it, so to make it easy to move, all of the internal connections are soldered into one giant twist-lock connector, that is definitely one of the coolest plugs I've seen: 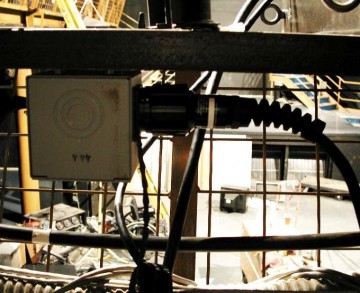 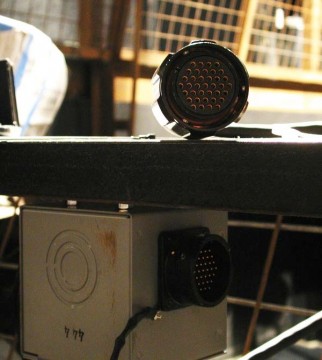 To the left of the coffin is the live sound engineer station, which will only be used when there's a band on stage. Our main mixing board isn't installed yet, but the equipment racks are. Here they are: 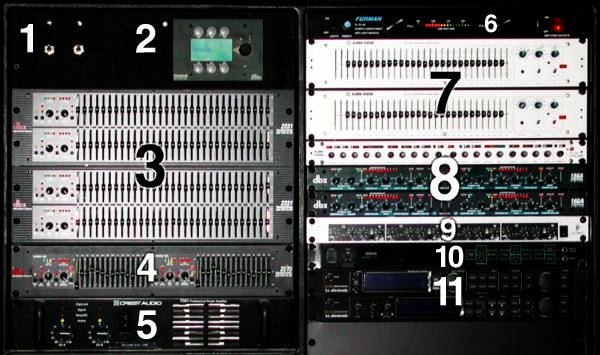