The gale-force winds that whip up and down 11th Street tore the grommets out of the sign, and then as it whacked into the building, the wood plank we had attached to the bottom to secure it snapped in half too. So we're sending it back to the folks who made it and having them put bigger grommets in it, but I'm not really sure how we're going to hang it. We don't have any mount points in the wall, so we had been just suspending it from two points from the roof, but that's clearly not enough. We could have some bolts sunk into the wall, or have the sign mounted to plywood, or any number of things, but since this sign is temporary anyway, we don't really want to spend too much time or money on it... Why is everything always so complicated?

We had our fire inspection, and like all inspectors, he found some things he wanted us to change, like add more exit signs. The rule is that no matter where you're standing in the club, you're supposed to be able to see an exit sign and an arrow; we had missed a few spots. So he has to come back and sign off (ha ha) before we can get our building final.

We got our "resale license", which is some extra business license you need to have on top of everything else in order to sell anything. And it's free: except, they told us as we signed the forms, for the $12,000 security deposit. It's completely unclear to me what this is securing, and of course, no bureaucrat can tell you. I assume it's the "paying the taxman" tax, or something along those lines. Smash the State.

The steel guys have finished the fence in front of the electrical panels. It looks really cool, and the mesh they used for it looks superficially similar to the rat-wire we have on top of the wall insulation, so the entry-way came out looking very consistent. 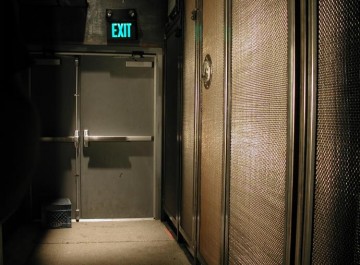 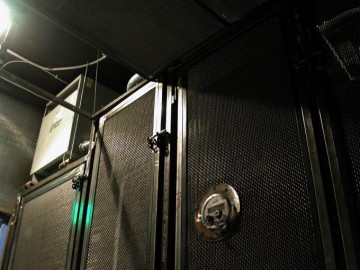 We've still been fooling around with the railing rust treatment. Pretty much everywhere we touched it when we were experimenting with a wire wheel on a drill, we screwed it up, so now we're gonna have to buff that part of the railing (the section across from the balcony bar) back down to raw steel, and rust it again, in order to make it look like the rest of the railing.

This week we also got some more painting done (the walls in the backstage area, and some doorframes.)