Here it is two weeks later, and tons of piddling little details have gotten done, none of which are even really interesting enough to talk about.

Beyond that stuff, the steel guys have been slugging away on the stairs, which are turning out to be a bigger job than they expected. Since the last update, they've gotten the side wall and handrail constructed. (These days, San Francisco's building code doesn't allow stairs to have just handrails, even if the part under the rail is filled in: they have to have a 42" high wall, with holes no larger than 4", plus a handrail inside that, at 36". A rail alone isn't good enough because, well, who the hell knows. That's what the rules are, as of a few years ago.) 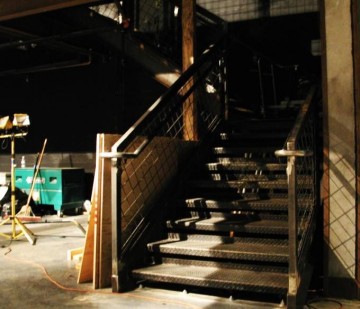 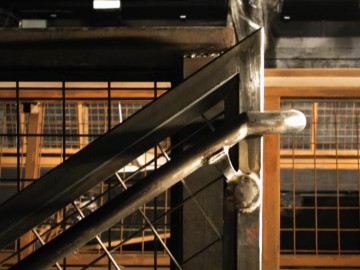 One odd thing we didn't realize we'd need to do is level out the balcony floor at the top of the stairs. Apparently the existing balcony has a large enough slope in it that the top step ended up being a couple inches higher on one side than the other! So the guys replaced roughly an 8'x8' section of the floor, and feathered the slope into the floor, so that now it's imperceptible, instead of there being a steep and obvious angle along the top step. I guess the old steps must have been tilted right along with the floor, or something. Another of the wonders of living in earthquake country?

Our cashier/ticket booth window has glass in it now. Somehow I haven't described this before, it seems: the booth has two windows in it opening into the main entrance hallway, and the window is framed in rusted steel, which runs into a continuous shelf that spans both windows. The glass is automobile windshield glass (so it should be fairly tantrum-proof), and there's an opening at the bottom for passing money and tickets back and forth.

There are also mirrors in all the bathrooms and behind all the bars now. But I found it to be pretty hard to take a picture of a mirror, since it ends up looking like a picture of the other side of the room. 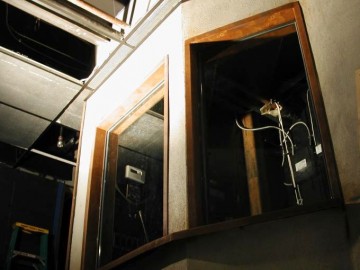 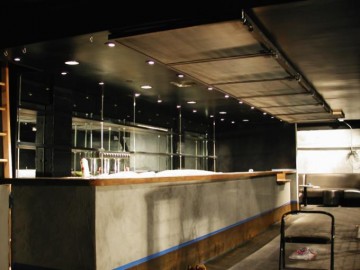 The cage for closing the balcony bar is mostly done: here's a shot of it in "open for business" mode. Those panels on the ceiling swing down, and can be locked together to secure the bar when it's not in operation. In the above picture, you can also see the rusted steel kick-plate along the base of the concrete bar face. (Ignore the blue stripe, that's just masking tape.) 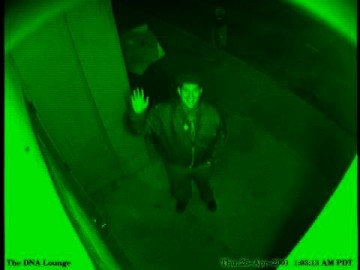 Our new alarm system comes with its own infrared video camera and a 24-hour VCR watching the front door. So we shouldn't have the problem of the webcam not picking up a good picture of potential thieves in the future. The security camera is what's on the webcam today. Look, here's Barry saying good night!

So you kids better stop pissing in our doorway, because now everyone can see.