Our oldest refrigerator finally died. This reach-in cooler had been running behind the old downstairs bar on the day we moved in, and since then, it's been sitting on the dance floor, holding the coke and water we keep stocked for us and the construction crew. So this thing had been running 24/7 throughout the entire construction project: through jackhammering, mixing of concrete, sawing of wood, cutting of drywall, and all manner of offensive airborne particulates. Every day, we were amazed at what an indestructible workhorse the thing was. It got steadily noisier, but it just kept going. Until today.

A moment of silence for the dear departed refrigerator.

The stairs are mostly installed now: the handrails and a few other adjustments remain. The installation is taking a while, but that's because the steel guys are super meticulous about the whole thing. Which is good! I've seen them de-weld and reposition mounts because one side of a 5' step would be 1/8th inch higher than another. 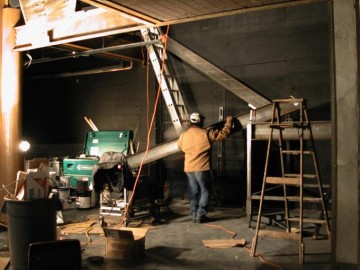 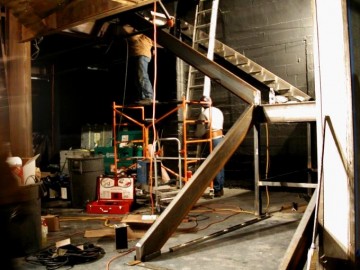 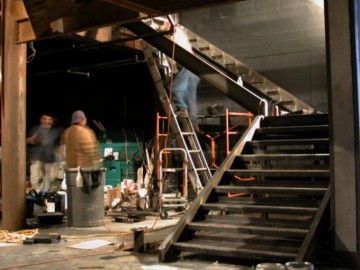 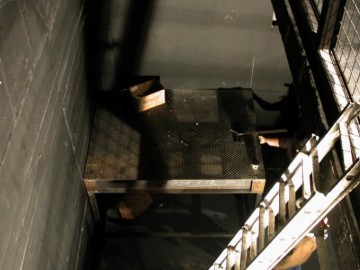 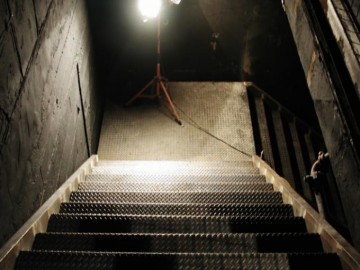 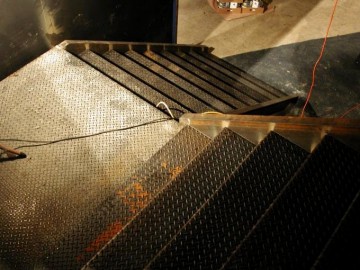 One of the unexpected things about watching the steel guys work is how the solidity of metal means nothing to them. Most people think of metal as something hard and inflexible, but welders don't. Which should be obvious in hindsight, I guess. But, for example, they have these saw-horses that are made of tube steel. And I can see how that came about: they needed some saw-horses; they had some steel. It took them 30 seconds to make them. And, an example with the stairs: the legs of the stairs' landing platform have big threaded bolts for feet, to fine-tune the height of the legs for levelling. And there are these steel tube sleeves that go around the legs, that drop down and cover the bolts. So when they were moving this platform in, they had to flip it over, and they didn't want the sleeves to fall off while they did this. Now to me, that job calls for duct tape. To them: they welded the sleeves in place, then de-welded them when they needed them to move again. 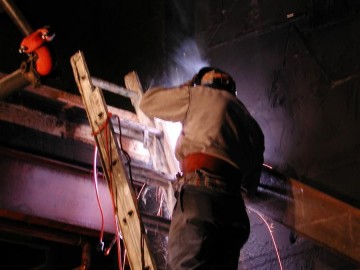 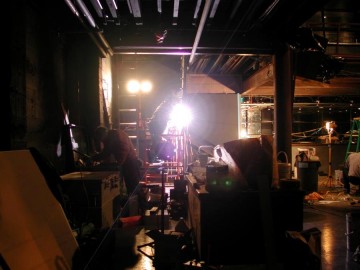 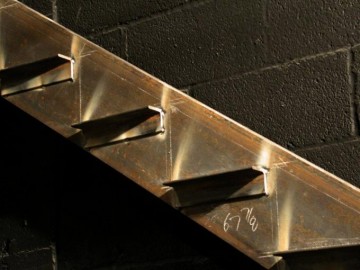 Two weeks ago, it felt like we were really close to being done. When the bathroom partitions went in, that meant that the stairs were the last major piece of construction left to be done: just that one thing! Then the next day, I asked our contractor why there were so few guys working, and he said, "there's not much for them to do now." That was nonsense, so Barry and I spent four hours walking around and making a list of everything that's left.

So Steve thanked us for making that list, and got his guys working on it. Then a few days later, he said to me, "We're just about done with that list, so I'm sending the guys home early today."

"So you're putting in a half day today why?"

Then he waved his arms and gave me some crap about "working efficiently" and "staging" and other excuses I didn't believe for a minute.

So then I re-did the list, breaking it down by trades (electricians versus plumbers versus Steve's guys, etc.), and marked off the things that had gotten done. I was able to cross off something like 10% of the items on the list, because while progress had been made on a lot of them, almost none of them had been completed. Some of them are non-critical details, but most of them, while small, are things that would cause the various inspectors to not pass us.

So now it feels like we've gone from "one thing left" to "two hundred things left." And we haven't seen Steve for a week (he's got a flu, and he's going out of town next week.) So some of his guys are here, but they get very little done when he isn't around, so it's going very slowly.

Also we've discovered that two amplifiers and the controller for the Emulator lights have gone missing. We have no idea what happened to them. Yay.