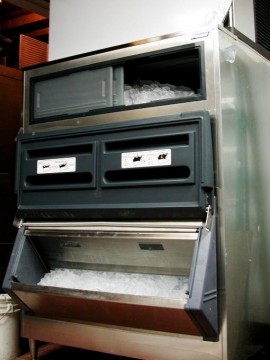 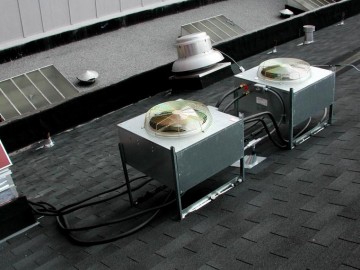 One of our two ice machines is now operational! It made 1,300 pounds of ice cubes in about 12 hours. The other one would be operational, but the drain below it is clogged, so it's turned off. But we're definitely never going to run out of ice... Maybe we can make some extra cash by selling ice to other clubs. Oops, forget I said that: I'll bet you need a different license for that.

The ice machines come in three parts: from bottom to top, there's the bin, the ice maker, and the condenser. The bin is the big box with the doors, and the ice maker sits on top of that. It fills an internal ice cube tray with water, and then drops a 5' sheet of ice cubes into the bin. The mechanism for how it decides that the bin is full is pretty clever: when the ice drops out of the maker, it pushes open a door. If the door doesn't close, then that's because there was nowhere for the ice to fall, so the maker shuts off.

The condenser is the part that makes "cold". Because of those pesky laws of physics, to make "cold" it also has to make "hot", and we don't need any more "hot" (or "loud") in the kitchen, so the 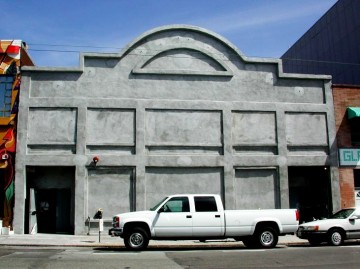 condensers for these machines are up on the roof. There are some high pressure hoses filled with coolant (ammonia or freon, I'm not sure) that run between the condensers and the ice makers.

The scaffolding is gone from the front of the building. Now we get to find out how graffiti-proof this graffiti-proof clear-coat on top of the concrete really is...

The mirror and shelves have been installed behind the downstairs bar, and the soda/juice guns and most of the beer taps are installed.

And they've begun painting the downstairs dance floor. An unfortunate result of this is that there haven't been too many people working, as there are far fewer places for them to stand. 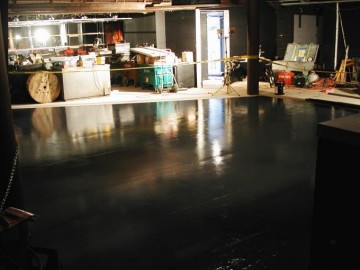 Let's see, what else... I rewrote the Remodeling page to be in the present tense instead of the future tense, since we've actually done most of that work now! And you may have been noticing that the audio stream has not been super-reliable lately. It was offline last week, because the fine folks at icecast.org found some pretty serious security bugs in their server (which we're using to deliver our audio streams) so I took it offline for a few days until I found time to fight with the new version of their server. (It was not what I would call a seamless upgrade.) Anyway, it's back online now, but ever since then, I've been seeing the server being kind of erratic: it's acting the way it does when there is network congestion (skipping, etc.) but at times when there does not, in fact, seem to be any network congestion. So I suspect the new version of the Icecast server is at fault. "Yay."