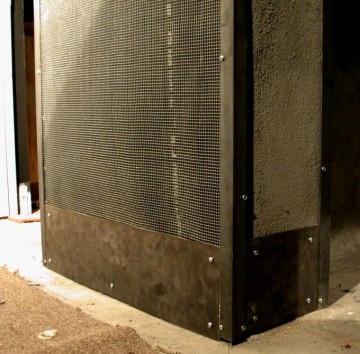 We ended up using a wire mesh ("rat wire"') over the soundproofing material. Though I really liked the concrete entry-way, I must say, this stuff looks pretty cool too. And it's almost a Faraday cage, so it's definitely the place to be to avoid lightning or electronic surveillance. It's pretty hard to take a picture of, though: my photos keep coming out looking like either a glittery fabric curtain, or solid black, neither of which are really what it looks like up close and personal, when you're surrounded by it on the walls and ceiling. But here's a closeup of the baseboard, that sort of gives you an idea.

The plumbers have hooked up the sinks behind the bars, and the various refrigerators and ice bins are now in place. As are some of the beer taps! The bars really look like bars now.

The upstairs floors are in the process of being painted: we're using a medium gray epoxy paint, and one of the layers of paint has sand mixed in, to provide better traction after drinks have been spilled on it.

Also the ice makers have shown up, though they haven't yet been hooked up. These are enormous: the ice storage compartment is 2 1/2' x 4' x 5', and then the actual ice maker sits on top of that. And we have two of them: that's 100 cubic feet of ice. Most of the kitchen is ice machine now: the parts that aren't water heater or sink. 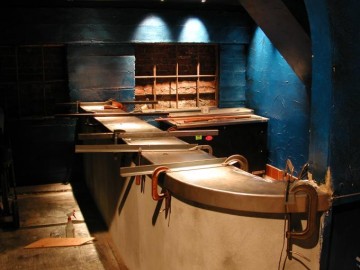 We had to have the steel guys re-do the surface of the upstairs back bar. It's not clear how it happened, but somehow we'd made a mistake in the design, and we only realized it after they had welded together the bar surface, and we put a cooler behind it. The bar overhung the cooler by too large a distance, so we had to have them cut it back about ten inches. Which involved taking the whole thing off, cutting out a section, welding it back together, and then re-glueing it to the wooden supports.

Alexis has been spending just about all his time working on deals with various distributors and meeting with promoters. It seems like a couple different promoters stop by every day to check the place out. Like it says on the Contact page, if you're interested in promoting an event here at the club, now is the time to start talking to him about it!

Barry and I have been spending the last few weeks debugging the budget. It's no fun at all. Fortunately we've gotten some good advice from a friend of Alexis's who has been running clubs for years: we got to see the books of a club of comparable size, which helped us a lot with details like how much you really spend on glassware, and what the electricity bill is likely to be.

We did a dry run of our noise abatement test with our acoustical engineer and his very expensive sound meter. The meter looks like it was manufactured in the forties, or like it belongs on a submarine or something. (I really like the action shot on the lower right of Bob and Greg shouting over the music!) Anyway, it's the same kind of meter that the cops have, so we got to see what they'll be seeing. We seem to be in pretty good shape, but we'll see... 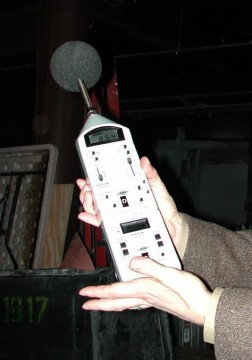 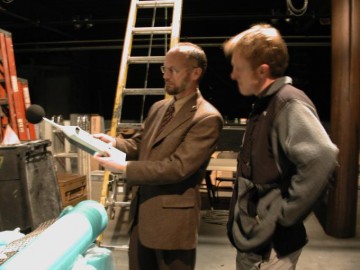 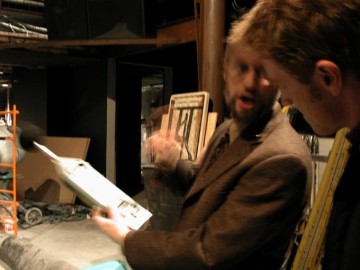 And the big news is that the final layers of the downstairs dance floor are going in! It's about halfway done right now. On top of the smooth concrete floor that we poured in December, we're first adding a layer of tar paper (for waterproofing, I'm told); then 1/4" of neoprene (the spongy material used to make wet-suits); then two layers of plywood; then thick epoxy paint. The layers of plywood are glued and screwed to each other, but are only attached to the concrete floor over by the walls. So that will make it be one giant wood sheet, sitting on top of a giant sponge. The floor definitely has a lot of bounce to it already.

They put down the first layer of plywood at a 45° angle, and the second layer in line with the walls, to make sure that none of the joints line up. It's also tongue-and-groove wood, so I don't think there's much chance of one of those sheets ever popping up... 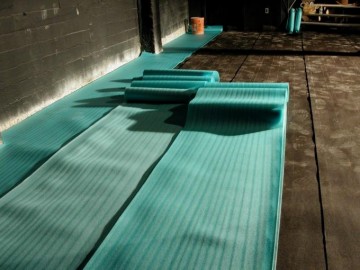 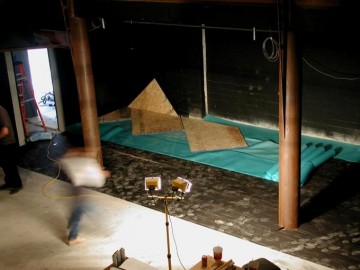 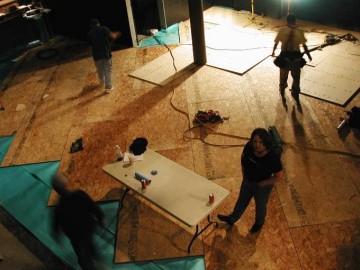 One of the things DNA came with was a funky old timeclock: Stephen got it working again this week. We were pretty confused by it, because it measures in decimal time: that is, instead of minutes, it 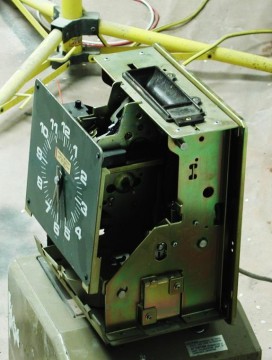 Of course, it has no setting for the year, so Leap Day will be fun. Oh no, another Y2K problem, but this one is with a clockwork computer! (It's electric, but it's brain is all wheels and gears.)

Both Barry and Alexis have had a few phone conversations recently that followed the pattern of, "do you want to do business with us? Because if the answer is no, just tell us that, and we'll be happy to stop bothering you."

What's amazing is when these people try to give us the excuse, "well we weren't in a hurry to get your job done, because it doesn't look like you're very close to opening." Which is why? Because everybody tells us that, and so nobody is in a hurry! Giving us that excuse is a good way to trigger a long, painful tirade.

We've also finally made a decision on cash registers: we're going to just buy cheapo non-networked registers, in the interest of economy and expediency, and consider putting in a real point-of-sale system later. Maybe I'll write one, maybe we'll buy one; who knows.