Happy anniversary to me.

This week's update is late because I've been procrastinating. It's now been a year since I've been doing these roughly-weekly updates, and as of March 3rd, it was the one year anniversary of the close of escrow. It's also been almost exactly two years since I first learned what a Type 47 ABC License was, and a bit over two and a half years since I made my first offer on this club.

So I wanted to do some kind of state-of-the-union thing here, summarize what we've done in the last year. But every time I thought about writing that, I just got depressed at how long it's taking, and found something else to do instead.

So, let's just forget about all that, and move on to "what happened last week."

Nothing terribly exciting. More of the beer-line installation is done (but not all of it.) That picture below on the left is of some of the pumps on the inside of the walk-in refrigerator, where the beer lines begin: they move the coolant, CO2, and Nitrogen around through the mile of plastic tubes snaking through the club.

The upstairs front and back bars have been mostly welded together. The bar surface is raw steel, and the front wall of the bar is concrete (really, concrete plaster over wood.) They're doing a really nice job on it: you can't see the weld seams at all. (The right picture below shows a lowered section of the bar: this is the required "wheelchair service" area for the upstairs front bar, where no wheelchair can ever be.) 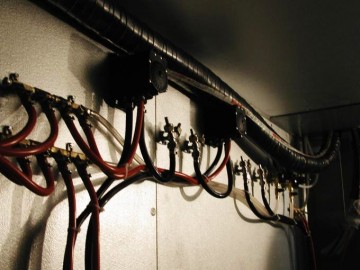 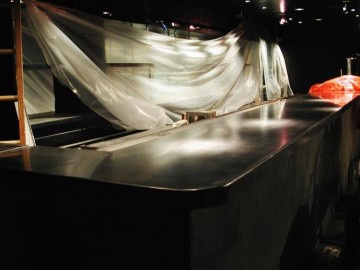 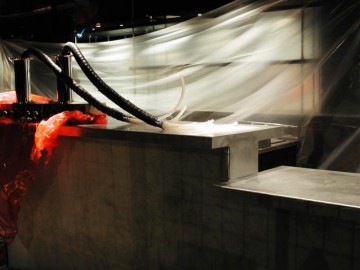 The last of the booths/benches have been installed (in the corners on either side of the upstairs front bar.) Those look really good; the one on the right feels almost like its own little room. And the water heater has finally been installed: check out the maze of plumbing coming out of that monster! Doesn't that look just like the "pipes" screensaver? In person, you really have to stare at it for a while before you figure out what goes where, since this club apparently has a four-chambered heart driving its circulatory system. 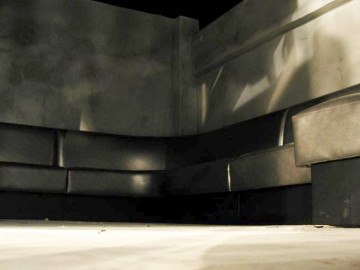 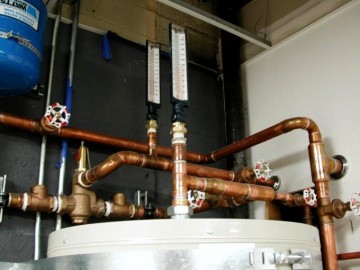 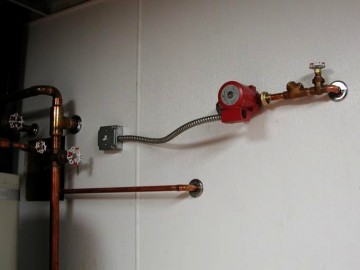 We had our acoustical engineer come back out and take a look at the soundproofing we've done, and make some suggestions for how to tweak it farther. He had some things to say about our entryways that made me sad. As you'll recall, we built zig-zagging six-inch-thick concrete walls in front of the doors, to act as a sound baffle, and to throw even more mass between the speakers and the outside world. They also looked great: you enter the club by going down a tall concrete hallway. So his comments on that were, "you did great by putting all this mass in the walls, but then you threw it all away by leaving the exposed concrete surfaces." He said that the fact that the walls were hard, flat surfaces meant that the sound would just reflect around the corners, and the density of the walls wouldn't make much difference. He basically told us we should carpet the walls, ceiling, and floor, to turn those areas into big walk-in mufflers.

He suggested one particular soundproofing material, which is basically two inches of very dense fiberglass insulation sandwiched between thick sheets of porous black paper. This stuff is for dampening out sound reflection rather than transmission. So we bought a few rolls of this stuff and glued it to the walls in the entryways. It made a shocking difference! Now as soon as you round the corner, the construction noises just disappear: it's like you put your head in a bucket. So I don't feel so bad about having lost those cool concrete walls, now that I've seen the difference this stuff makes in the amount of sound that it absorbs.

We're still working out how we're going to protect this surface: since it's basically a paper backing, it will get torn and otherwise messed up if it's exposed on its own. Probably we're going to cover it with some kind of tight wire mesh. (It's important that whatever we cover it with not be a solid, flat surface, or we'll defeat its purpose.) Some people just put carpet over this stuff, but I like the idea of a wire mesh better.