The front doors continue to be a major source of stress.

All the pieces finally arrived, and the south door was installed on monday. Then the fellow who installed it took off, because he was going on vacation the next day. So I went to look at it just after he left, and it seemed fairly solid. I went outside, locked it, and tugged on it. It rattled, but it was locked. Then I tugged on it really hard a couple of times, and it popped right open! I went back inside and looked at it, and discovered that he had attached hardware to the left door, but not to the right door. Notably missing was anything that would secure that door to the frame or the floor, meaning that there was no way to actually lock up the club. And almost everyone had left for the day: after all, it was almost 2:30pm, that's quitting time!

Fortunately one of the guys who hadn't left yet figured out a way to carve a 2x4 into kind of a hook, to slip under the doors and then nail to the floor to hold them closed. So we didn't have to actually poke any holes in our brand new doors to be able to go home that night.

So remember how it was only going to take a day to put the doors on once they arrived, which was why they wanted to do the concrete work after the doors? Well, so far, installing the doors has taken two guys seven full days, and they're still not done. The doors still don't close right (they lock, but you have to tug on them: when they swing closed, they don't latch.) And when they're closed and someone tugs on the handle from the outside, you can see the whole doorframe twist and deform. So I'm worried that even if they spend weeks tweaking and tuning these doors so that they fit properly, the fact that the frame is flexing means that the first time some idiot tries to break in by yanking on the handle repeatedly, the frame will bend enough to throw the doors out of whack again.

Our contractor's notion of what a "schedule" is drives me insane. It seems like when he says, "it will be done by wednesday afternoon," what he means is, "the guy who will be doing the actual work told me it will be done by wednesday afternoon." But the thing is, he knows that the guys who work for him are total flakes, and sometimes just don't show up at all. Yet his answers suggest that this takes him by surprise every single time. So it has proven utterly impossible to schedule anything based on his dates. He seems to think that answers like "well the guy didn't show up" should satisfy me, when I have to call up the person I've scheduled and tell them, "oh, nevermind."

One day this week, a guy came in and introduced himself as the sales rep for the company that manufactured our toilets. He'd heard we were using them here, and just wanted to take a look. He seemed really pleased, I guess he doesn't often see them in places that aren't prisons! 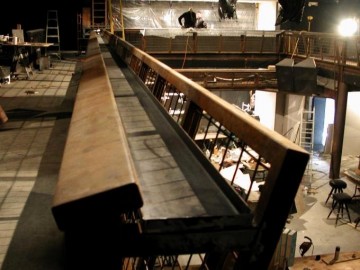 The drink rail along the balcony is in place. The sound guys have finished tuning the sound system. They want to come back and tweak it a little more once the room is full of people instead of construction debris, but they're basically done.

The floor in the kitchen has been tiled, and they've started tiling the floor behind the bars. (These areas have to be particular kinds of surfaces for health code reasons; apparently concrete is more porous than they like.) 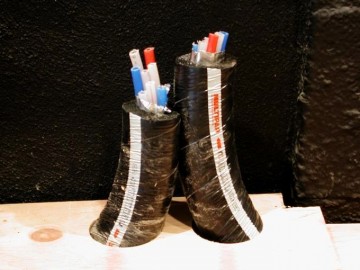 The guys from the beer distributor have been slooooowly installing the refrigerated beer lines, going from the walk-in refrigerator to the taps at the front bar. They had to drill some four inch holes through some beams to run the line, and it took them two days to drill the first hole, so we finally gave up and had the plumbers knock out all six holes in a couple of hours.

Sadly, the beer tubes won't be much to look at, once everything is closed up: the tubes are wrapped in really thick foam insulation, so it's just a big black pipe. I wish you could see the fluid moving through them, but alas.