The concrete guys have gotten a lot more done this week! In addition to filling more walls with concrete, they're also doing a cement plaster over some of the adjoining interior walls, to make them look consistent. The entryway is going to look like it's concrete all the way through.

The bathroom walls are tiled and grouted, and the floors are just about done. They're looking great. The pattern of tiles on the floor in the womens' bathroom is really cool, since the lines follow the funny-shaped wall and radiate out. 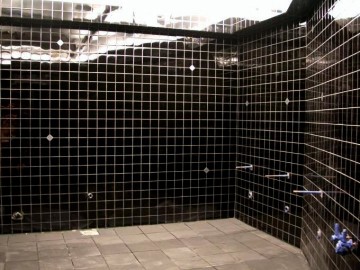 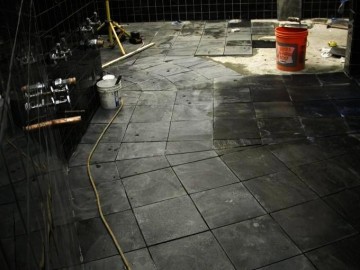 We have new steel guys, and they kick ass. They're here, and they work fast, and their work is really well done. Right now they're repairing some cosmetic screw-ups in the railing, and doing some detail work like sanding down all the clothes-snagging burrs on the steel. We're waiting for the raw materials to arrive from which they will construct the front stairs, and the rest of the rail around the stairwell.

The carpentry work on the upstairs front bar is mostly done: the shelves and cabinets have been built and installed, as has the mirror behind the bar (you can't see it in this photo because it's covered with paper). We're still working out a way to secure that bar when it's not in use; the current plan is to do something like what was there before, and have stiff screens that swing down from the ceiling to cage it in. That way we don't have to worry about putting bottles away and otherwise making sure people don't get back there and wreak havoc.

Also mostly finished this week were the t-bar dropped ceilings above the downstairs front bar, and the kitchen area in the back. I really didn't want a ceiling above the bar: without it, you can see all the plumbing that is underneath the upstairs bar, and it looks really cool. But, bars count as food-prep areas, and the health code says that the ceiling has to be smooth and washable, and I guess a tangle of pipes doesn't really count. You'll still be able to see the pipes a little bit, though, since we're not walling in the front edge of the dropped ceiling. So if you are standing back from the bar, you'll be able to see into the gap between the lower and upper ceilings, which is full of plumbing, electrical conduit, and (soon) beer and soda lines. 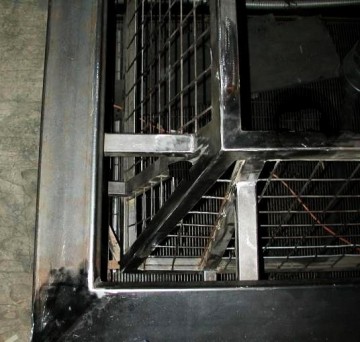 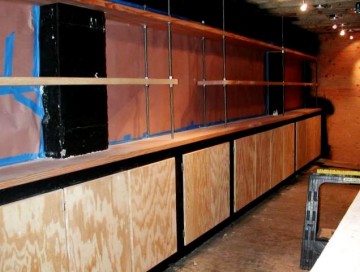 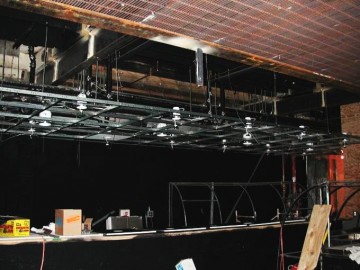 The new front doors are definitely arriving two weeks ago, so we're still waiting for them. Nobody can tell me where they are. The vendor is doing "everything he can," which is, apparently, calling the distributor every few days and politely asking. If the distributor has an answer, I have not heard it. I've heard where they ought to be and when they should have been shipped, but nobody can tell me where the damned things actually are right now.

Some of the concrete work on the front wall couldn't be done until the door frames went in. We have the frames, and not the doors, but Steve was going to wait until the doors arrived to put the frames in (since the doors were, and are, going to be here "any day now.") After that, it's a small matter of doing the simple concrete work. Which is easy. It only takes a week. So I said, "well put the frames on now, that way when the doors arrive, we're an hour away from having working doors, instead of a week away." He didn't want to do it that way. I explained again how much money every day of delay costs me. So they put the frames on, over the strong objection of the carpenters, who say that if you put the frames on without having the doors that go in them, it's often a huge pain to get the doors to fit. But that's a risk I was willing to take to save a week, so we did it anyway.

This door thing is a huge hassle, because waiting for the doors to be installed is basically the only thing stopping us from scheduling our Noise Abatement inspection, which is our last serious hurdle before we can finalize our operating permits. (We were granted the permits last year, after a long battle, but they're contingent on passing a bunch of inspections, all of which we passed last year except Noise Abatement, which is why we did so much soundproofing during the remodeling.)