We fired the steel guys. This was kind of a shame, since they did really good work, when they bothered to show up. Which was increasingly seldom. And the worst part was that they would tell us they were going to be there, and then not show, and not call. Twice we sent them official "if you're not working tomorrow, you're fired" letters, and that got them to show up for two or three days in a row, then after that, they immediately started flaking again. All the steel work was supposed to be done more than a month ago. So this last time, we cut our losses. Now we're looking for new steelworkers to finish the last few details on the railing, and put in the front stairs.

Most of the workers we've had here have really been busting their butts, but every now and then we get a crew who are pretty much just killing time and waiting to go home. The current example seems to be the concrete guys, who are filling up a few more walls to make this place even more bomb-shelter-like, noise-wise. Basically, they mix up some concrete (dump a bag into the mixer, spray it with a hose for about a minute) then pour it from the mixer into a bucket, then pour it from the bucket into the hole in the wall. This is not a delicate process. They really do just dump it right in, it's not like they have to be careful about letting it settle or anything. Concrete is very much a liquid at that stage.

Our new front doors are definitely being delivered yesterday. Steve said they'd be here the day before yesterday, or yesterday at the absolute latest, so we'll definitely be expecting them to arrive yesterday.

On wednesday, Butter (the bar across the street from us) had a hearing related to their application for a Place of Entertainment permit. We didn't get to talk to the Butter boys before the hearing, so we didn't really know what the story was until afterward (like, why they felt the need to get this permit at all) but they asked us to show up for moral support, so we did.

The police station must have been built in the same year as my high school, because I swear, every time I go in there I get these horrible flashbacks. Same color scheme, same nasty lighting... One time we went into someone's office, and it was like going into The Office. *shudder* 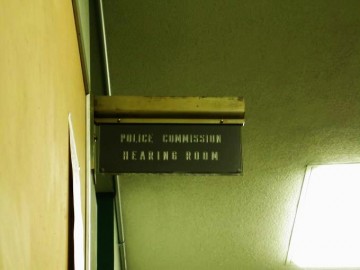 Anyway, the way these public hearings work is, you sit in a big room full of uncomfortable auditorium chairs, facing a giant desk on the other side of the room. There are a couple of cops behind the desk with microphones, and over on the left side are various other bureaucrats (the permit officer, someone from planning, or whoever else needs to be there that day.) The presiding officer goes down a list calling off case numbers. Most of them go quickly: "Thirteen. Application for massage parlor permit." Pause. Nobody stands up to protest. "Approved."

When it was Butter's turn, Carlton and Chris went up to the bench, along with the permit officer, and they had a conversation with the officer behind the desk that none of us could hear. That's why they call it a public hearing: because the public couldn't hear anything.

So, nobody protested (which surprised me) but they also have to come back next week and do it again, because the cops forgot to do some paperwork dance or another. This also is typical.

The applications that require discussion are always the ones related to making noise. For example, "application for permit for loudspeaker, City Hall plaza, at noon on saturday." They discussed that for about ten minutes. I'm always amazed by this. I mean, here I am, sitting in a government building, listening to people applying for permits to gather in public and make political speeches. And I say to myself, "hey, isn't this completely unconstitutional?" And I ponder, and then answer myself, "Why yes. Yes, I believe it is."

"No animal shall sleep in a bed with sheets."

So afterward, I asked Carlton why he was applying for a Place of Entertainment permit at all, when they don't actually have paid entertainment at Butter: they play music, but it's just a bar. I didn't quite understand his answer, but it was something along the lines of, someone from the Captain's office suggested that it would be a "good idea to have one anyway." Hmmm. Interesting.

There was a reporter at the hearing as well, and she asked me a few questions about the Dance Hall Keeper permit (since she was rightly amazed that here in this modern age, a city like San Francisco still regulates whether people are allowed to dance.) I told her the story of the time when the Holy Cow lost their Dance Hall Keeper permit for a few months, and had to hire extra security to wander around and tell people to stop dancing when they spotted it. After she had picked her jaw up off the floor, she asked me, "so how do you go about getting a Dance Hall Keeper permit, if you wanted to open a new club?" "Well," I said, "you don't. The only way to get a Dance Hall Keeper permit is to take over an existing business that has had that permit since the 80s." Because in the intervening years, South of Market has been re-zoned a couple of times, and nightclubs are technically not allowed here at all. The only reason any exist is because those were here already.

This bears repeating, because I don't think many people fully comprehend this part:

Since it's not legal to open a brand new nightclub in SOMA today, that means that every one that closes is never going to be replaced. It can't be. Not unless the zoning laws change.

Why do all these people want this town to suck? I just don't understand.

I got some email from my broker yesterday. Her comment could be summed up as, "Holy shit you're spending a lot of money! When is this going to stop?"

I wish I knew.

But at least there was some news that brought a giddy smile to my face today. As you may recall, two of our neighbors here on 11th street, the Transmission Theatre (a nightclub) and Twenty Tank (a brew-pub/ restaurant) closed their doors recently, and transformed into office space for internet companies. Well I can gleefully report that both of those companies have already gone out of business!

Bring on the recession!

Perhaps this means that Transmission will turn into a club again. I doubt Twenty Tank will be coming back, though. They are sub-leasing the building, since they couldn't afford to run their business there any more with the higher rent. So now they owe the rent on the property, and they've already demolished the kitchen and bar. Oops.

Oh, and VSF, the club at 11th and Folsom (formerly The Oasis), is for sale again. Sigh.