This week, the sound guys hung two of the four main downstairs speaker clusters, plus the under-balcony fills. They would have installed the other two as well, but we're waiting for a mounting bracket to be welded to the front of the dj platform, and that's running late because one of the welders is sick, and the other landed himself in the hospital somehow. Thankfully not on this job... 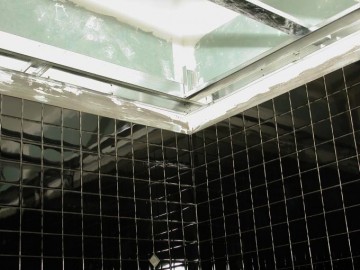 One of the bathrooms looks to be almost completely tiled; but I think this is one of those situations where the first 90% is done, and only the second 90% is left. I expect that most of the work will be putting in the grout, and the tiles in hard-to-reach places.

The lines for the soda guns are partly installed. For bars, bulk soda and juice come in big cardboard boxes, with a bag of concentrate inside. Water and carbonation are added by the juice gun itself. These boxes will live on shelves in a back room, and be pumped out to the guns at each of the three bars. So there's a couple hundred feet of plastic tubing that needs to wind its way along the ceiling. It's a single three inch bundle that has ten tubes inside it.

The juice boxes are stored warm; the way the drinks get cold is that, at the end of their journey, the tubes pass through a flat plate that sits at the bottom of the ice bin at the bar, chilling it just before it comes out the nozzle. Carbonation is also added late in the game, by a device that pumps it full of CO2. 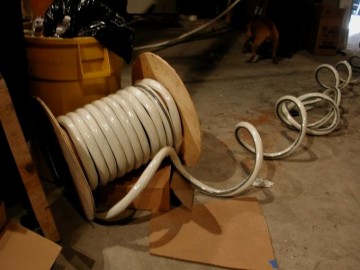 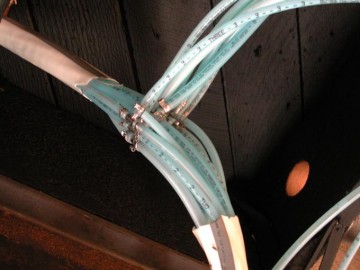 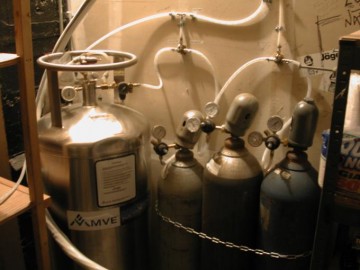 Beer will travel through a separate bundle of tubes. It will be the same basic kind of setup, except that beer doesn't come from concentrate, and can't be allowed to get warm once it has been unsealed. So the kegs will live inside the walk-in refrigerator, and the tubes themselves will be chilled, by one of the tubes in the bundle having refrigerant in it (the aforementioned Glycol system.)

This system uses a lot of CO2, since it's used not only for carbonating the sodas, but it's also what pushes the liquids through the tubes. Another cool thing about our setup is that we won't need to haul heavy gas canisters around: we have one giant tank that can be filled from the street: the soda guys come by and just plug their truck into the building.