A lot of stuff got done this week!

The ductwork for the ventilation system is mostly installed, and it is very cool looking! I didn't expect it to look as neat as it does. There's a roof penetration near the front of the building, and from there, a 3' duct starts worming its way around the perimeter of the building, shrinking down to 1' at the ends. There's a fan on the roof that blows air into this duct from outside. Then there's another vent in a big metal box up in the rafters above the stage that sucks air out (the two vents are not connected except via the air in the room.) We don't have the roof fans yet.

The lighting truss above the stage has been mounted; it is also very cool looking. Each segment of truss is made up of four pipes, and there are four segments, so it's a squared tube roughly circling the stage. The stage lights (par cans, mostly) will be bolted to this. There are also a bunch of segments of steel pipe bolted to the ceiling beams; this is where we will hang the Technobeams and strobes for the dance floor lighting. Most of the electrical work for these mounting points has also been done, so we ought to be able to actually hang lights from them real soon now... 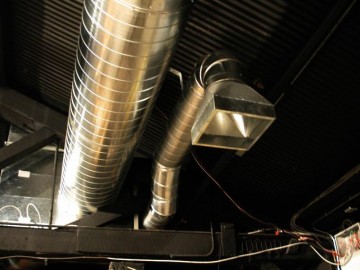 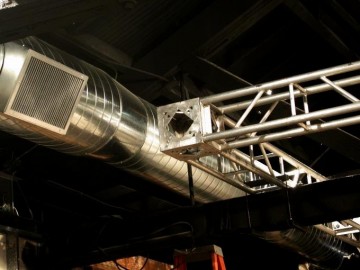 The center cluster of speakers are up, hanging from the steel cage that was installed last week. There are three of them, pointed forward and to the sides. These are for sound upstairs on the balcony (so that when you're upstairs, you aren't hearing the band filtered through the floor, and thus getting only low end.) 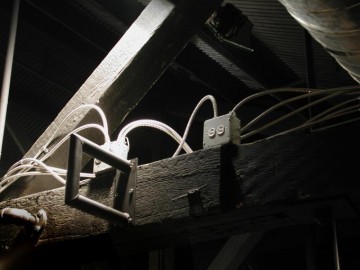 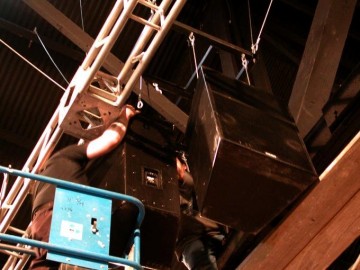 The downstairs bar is framed out, as are the walls for the new ticket booth and entryway. The walls around the entryway are 8" thick, and will be filled with sand, for soundproofing purposes. (A lot of sound leaks through open doors, so the entryway is kind of S-shaped to act as a sound baffle.) The plumbers have been working on the pipes that go to, from, and inside all three bars.

The walk-in refrigerator in the back has been completed (it's twice as large as it used to be, and has a new compressor.) The compressors for the ice makers have been installed on the roof (though the ice makers themselves have not been hooked up yet.)

Our new stools have arrived, as have the booths/benches for upstairs (though the latter haven't been assembled or installed yet.)

And finally, the concrete infills for the front wall has been done! I got to carve my initials in the wall of the building, 25' up. A dozen guys came in early in the morning and brought in a giant hose from a cement truck on the street; they sprayed the concrete at the wall, and smoothed it over as it glopped on. This stuff is called "shotcrete," which I gather is the kind of concrete that is viscous enough that you can spray it on a wall without needing to have forms on both sides. So, by tomorrow morning, we'll have a solid concrete front wall and no windows, which should help our soundproofing situation a lot.