Layer two of the floor sandwich has been poured. To recap: we already had a big ol' concrete floor. But it was not particularly level or smooth from wall to wall. So first a thin layer of "self-levelling" something-or-other concrete-like substance gets poured over it, to make it be flat and level; then on top of that goes a sheet of something soft and springy, then on top of that, two layers of plywood (attached to each other, but not to the floor.) Then paint. That'll make the floor nice and bouncy. If we didn't level the floor before putting the plywood down, there would be soft spots, and the wood would be all torn up in a year. Or so we're told. 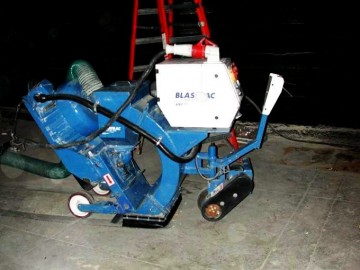 So first, they had to rough up the surface of the floor, and get all the old paint off and so on. They did this with a "bead blaster": like a sand blaster, but it fires tiny plastic beads at the floor. (Hereafter referred to as "the Zamboni.") It took two guys to operate this thing. Now, perhaps I'm missing some important detail about the subtlety required in Zamboni operation, but as far as I could tell, they each took four 10 minute breaks per hour. The process seemed to go like this:

Meanwhile, nobody else was in here working, because we were told that the building had to be completely empty while they did this: that nobody could be on the floor. So all other work stopped for two days (thursday and friday), until the floor was in. But (prepare to be shocked!) they told us that they weren't going to be done in time, and would need to also come back monday, and maybe tuesday. Meanwhile we've got all kinds of stuff scheduled for monday, including deliveries of stuff that needs to sit on that floor. So Steve (our general contractor) spent an hour or two yelling first at these guys, then at their boss. When he explained "be done before monday or don't get paid," they decided that coming in on saturday to finish the job would not be too terrible a hardship for them.

Anyway, they finished their Zambonification on friday morning. After that, they jackhammered down a few high spots on the floor (using a jackhammer attachment that looks like a meat tenderizing hammer, that turns concrete to dust.)

The way they plotted out the new plane for the floor was kind of clever: they drilled screws into the floor near the walls, and strung up a grid of thread, with 6'x6' cells. Then they raised and lowered the endpoints of the strings until all the crossings lined up: at that point, they had a level plane. For the outer edges, they cheated a little bit, and angled things down very slightly to make it line up with the existing floor in some important spots, like where the stairs touch down. After that was done, they put screws into the floor at each intersection, at the same height as the strings. Then the strings came out, and when they poured the floor, they made sure that each 6'x6' section lined up with the screws at the corner. They also painted down a layer of some kind of pink glue for the new stuff to stick to. It looked like someone dumped fifty gallons of Pepto Bismol in here. 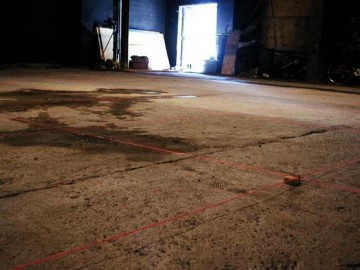 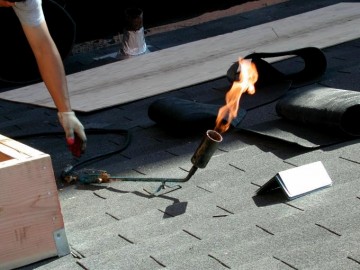 There are a few new holes cut in the roof now, where the fans will sit for the new ventilation system. They use a flame thrower ("torch" is just not a strong enough word to describe this thing) to attach tar-like roofing material to the plywood frames. Fire's cool.

The first truckload of sheet metal for the ventilation system has arrived, and they've started hanging it. There's a lot of this stuff; This appears to be another case of us being forced to massively over-engineer things because the building codes require it, since they're geared toward office buildings and places that want to be a constant 72 degrees, instead of a nightclub... But we need something or it will be over a hundred degrees in here once it's full of bodies; and as with so many things, if you build anything, you have to build way too much. 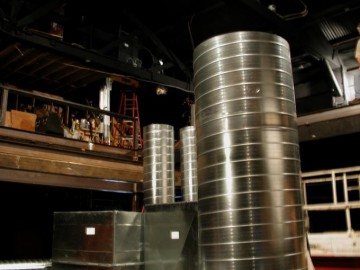 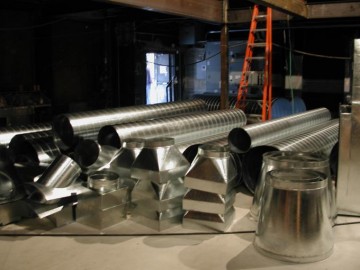 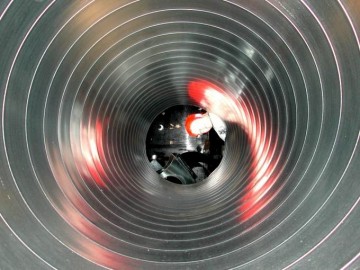 The guys from JK have been out here hanging the support from which the center cluster of speakers will be suspended; they build a welded metal frame, and it hooks in to the ceiling in several places with steel cables. Barry had an entertaining conversation with one of them the other day:

Hear that, kids? Stay in school.