Here's the kind of bureaucratic red tape we have to deal with all the time: the City's plan checker wanted a one word change in one of our plans. He wanted the word "mezzanine" changed to "second floor." He wanted the engineer who drew up that plan to show up in person to make this change and initial it. Apparently it couldn't be faxed, or couriered. So then the engineer spent a day back and forth on the phone, arguing with the guy about how silly this is. And lost the argument. And then spent another two days trying to reach the guy to make an appointment with him to come do this thing. And the actual appointment got set for days later. Meanwhile, another week went by before we got final approval on those plans. Sigh.

Let me emphasize that this was not an isolated incident. It's like this all the time. Every step of the way.

The heavy girder work is done: there are more than a dozen girders reinforcing the balcony now, all welded together and bolted into place. Also, the first traces of the new upstairs railing have shown up. The footing of the railing (the foot-rest bar, which also doubles as the "don't accidentally kick a dropped cup off the balcony" wall) is in place, and bolted to the edge of the balcony. This is a set of I-beams that are about eight inches high and four inches thick. 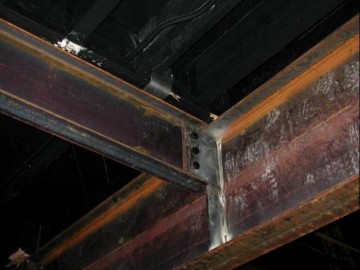 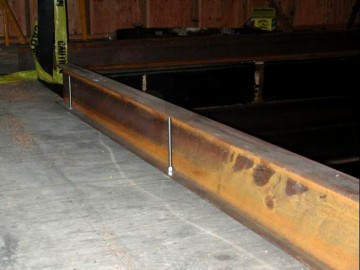 There are two guys doing all this metal work, and it's absolutely terrifying to watch them work. Every time I watch them for more than half a minute I start thinking, "ok, this time they're going to drop that thousand pound beam. This time one of them's going to lose a leg for sure." But they never have! They lift the things up with a hand-crank forklift, then get up on a precariously-balanced ladder, and slide and shove and whack the thing into place. It always looks like it's about six inches from coming crashing down until the bolts finally go in.

The downstairs speaker wire is in place. This is some serious wire! Each cable is about an inch thick, and has six conductors inside it (since each bundle of speakers has separate inputs for high, midrange, and bass.) We had our electricians run four inch flexible metal conduit along the underside of the balcony for the speaker wire to go inside of; this protects it, and also looks darned cool. There's one down each side of the balcony, and a third down once side that will be for the snake (the many-channels conductor that goes between the sound board and each microphone on stage.) After these conduits were in place, the sound guys came out to run the wire: they threaded it into the conduit by first pushing a stiff wire through, and taping the end of the bundle of cables to that, and then pulling really hard. 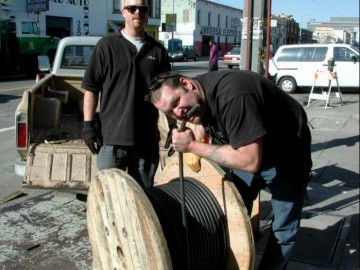 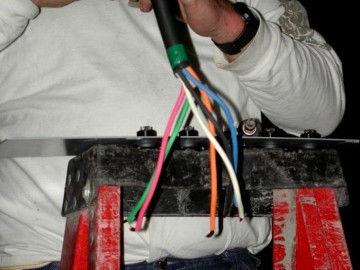 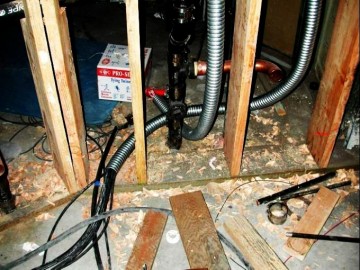 They lubed up the cables with KY jelly to make this job go, uh, smoother. I am not making this up.

The plumbers are just about done with the in-the-wall stuff in the downstairs bathrooms; as they're finishing up the last of the work on the men's room, the drywall-and-tile guys are coming up behind them, working on the women's room. First they covered the wall frames with plywood; then on top of that went drywall; and on top of that will go tile. The reason for the plywood is to that if someone has a temper tantrum in the bathroom and kicks the wall, their foot won't go through it. The reason for the drywall is that you can't stick tile directly to plywood, for some reason I didn't bother to find out. (This isn't normal drywall, it's some bathroom-specific kind. I guess it's more waterproof or something.)

Once the tile is done, we get toilets!

Oh, speaking of toilets. The toilets we bought have their seats 15" above the floor. (Which is the same as on the perfectly normal looking toilet I have at home, I just checked.) But oh no no no, the planning code says that, for handicapped accessibility reasons, toilet seats must be 17" inches off the ground! So we'll have to build 2" spacers under each toilet. And these can't just be a couple of sheets of plywood, because it's a bathroom, so it has to be sealed, yadda yadda yadda, so they have to actually make molds and pour these things out of concrete or something like that. This isn't a particularly big deal, but it's just one more stupid detail.

They can only close up one side of the bathroom walls, because we haven't gotten our plumbing inspection yet, and if both sides were in place, the inspector wouldn't be able to see the pipes. So they're closing the inside, which is where the tile will go.

And once the drywall is on, we have to have an inspector come out and look at it before they can glue tile to it. Why? Because they might have not put the screws the regulation number of inches apart. Why is a city inspector involved in this? I mean think about it, what's the failure mode here? The contractor is licensed, and is obliged to guarantee his work. So if they didn't put the drywall up properly, and it, I dunno, fell down or something, the contractor would be the one who got screwed, because he'd have to fix it for free. So he's highly motivated to not have that happen. Yet there we are, getting slowed down at every turn because we have to schedule time with the bureaucracy to make sure that everyone is acting in their own best interests.

Clearly we have entirely too much government.

After seeing the bathrooms come together, I'm a little concerned that they might be too cramped. It turns out that there are both "standard" and "legal minimum" sizes for bathroom stalls, and we're using the minimum size, to fit in as many fixtures as possible. But it seems like everyone else in the world uses the "standard" size, so ours are going to seem pretty tight. But, it was a choice between having three toilets and five...

The electricians are working on getting power run to everything upstairs. They've run the power from the transformer to the location of the dimmer packs (the glorified potentiometers that make the stage lights go bright and dark) and from there out onto the beams, where the lights will be mounted on truss. They're also running regular non-dimmed power various places. They're doing this all in flexible metal conduit, and not bothering to hide it, because it looks so cool (it stands out a lot: shiny metal tentacles bolted to flat black concrete walls.)

The carpenters have finished building the forms for the front windows to be filled in. One of the next things they'll be doing is putting bigger door-holes in both upstairs bathrooms. See, all we're changing about those bathrooms is putting new toilets in them, and painting: the walls are staying in the same place. But oh no no no, that counts a remodel (or triggers some nuance of the law in some arcane way) and as a result, the doors have to be handicapped-accessible. That means that two-and-a-half foot wide doors aren't good enough (even though they've been there for twenty years.) We need to put three foot wide doors on those bathrooms. The bathrooms on the second floor. The part of the club that someone in a wheelchair cannot get to because they're (thankfully!) not making us put in an elevator.

We met with our sheet metal guy, and have pretty much worked out where the ventilation duct-work will be going. It sounds like we've figured out how to get it into fairly nonintrusive places (I was worried that it would be taking up a lot of room and make the ceiling feel lower in some spots: some of these ducts are two and a half feet across...)