One of the guys told me the other day about some new brand of circular saw that has a "flesh sensor" built in: it somehow detects meat, and stops the blade cold by firing a rod through it to lock it up, before it lops something off.

Apparently it comes with a hot dog, for testing purposes.

This week, our girders arrived. The small ones (and when I say small, I only mean that in comparison to the big one) are being hung on the underside of the balcony, stretching from the top of each pillar to the wall; the big one (and when I say big, I mean huge) will be the support for the dj platform and the front segment of the balcony: it's hugeness is the reason we can get away with removing two of the four pillars at the front of the building. When you kick this thing, it rings like a gong for about a minute. It weighs 1,700 pounds. And it will be above our heads. 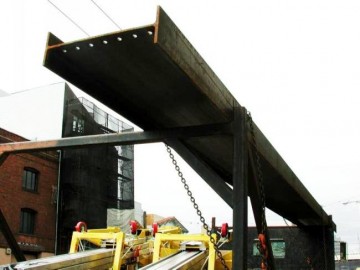 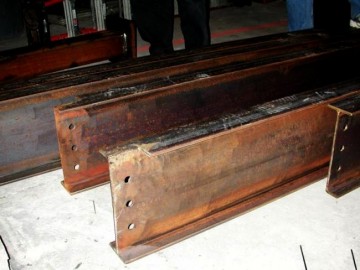 The upstairs front bar has been framed out. The plumbers are plumbing. The electricians are electrishing. Progress marches on.

Part of the floor is being cut up again, because, well, let's just leave it at "because" for now, so that I don't piss off people I shouldn't be pissing off just yet.

Is there anyone out there who does audio webcasts with Icecast, and who also makes quarterly reports to BMI? They're asking me for information about how many people were listening when, and it doesn't look to me like Icecast logs the information they want. If you deal with this, I'd love to know how...