Wow, I got more email because of that conduit story than any previous thing I've posted here. Apparently "how to get cable through conduit" is a geek hot-button of some kind. We just had the electrician do it. Our phones are fine again.

There's now a new floor in the upstairs back rooms (a new layer of plywood, soon to be covered with a thick epoxy paint) and they're starting on the balcony floor now. We had a new dj coffin built for the upstairs back room. It looks pretty cool, it's nice and compact. I think that by the end of the week, the final upstairs sound system should be installed, except that we'll probably have to take some of it down temporarily when the time comes to install the ductwork for the ventilation system.

And the really great news is that there's a new floor downstairs! Well, the first layer of it, anyway; the important detail is that the gaping holes and enormous piles of dirt are gone, and there is a lot of freshly-poured concrete. We weren't quite sure if this was happening today: there was some kind of screw-up with what was getting inspected when, and we lost our appointment with the concrete guys. So, we only got the concrete poured today because it rained today, meaning they were able to blow off another job of theirs. So the rain dance I did last night must have worked. 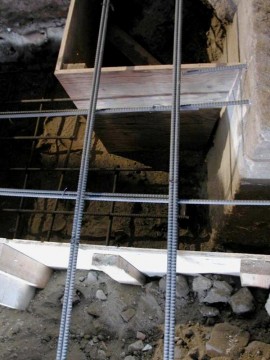 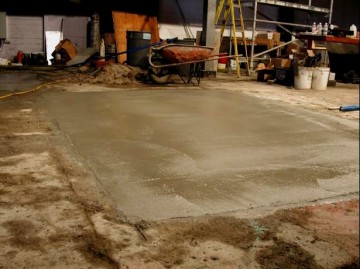 Someone already stepped in it -- this guy came walking in the front door, and *ploop*, sunk in halfway up his calf and lost his shoe. He was lucky he stepped in the shallow end: our contractor says that if he had stepped in the deep end, standard operating procedure is to wait until the bubbles stop, then just smooth it over.