We have a general contractor now: we've accepted one of the bids on the job, and now construction proper has begun! Well, mostly it's still demolition, but it's more hardcore demolition than before, and it will be construction real soon now. This is a pretty major milestone! 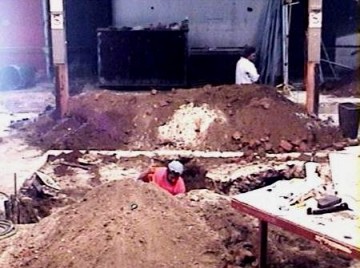 Someone looking at the webcam asked, "hey, what are those guys digging? A mosh pit?"

Like I said in the last update, they're exposing the sewer and water lines. Since we're moving the bar and adding a bathroom, the old pipes (to the old bar) need to be capped off, and new drains and water pipes need to be installed in the new locations. What we've learned since last week is that apparently the sewer lines are not as the existing plans indicate (wow, what a surprise.) At some point in the last hundred years, several of the lines seem to have been abandoned and new lines run. So they also had to figure out which ones are still live, and where they are.

With all this digging, we get to see what's underneath the DNA. It's landfill, of course, like most of San Francisco, but I didn't know what "landfill" really meant: around here it means, "two or three feet of sand, and below that, the wreckage of whatever was standing here before the 1906 quake knocked it down." So the DNA building is built on top of the burned out rubble of whatever building was standing here before: the next four or more feet underneath the sand is full of old bricks and burned wood. The whole club smells like fire now, from the cinders that have been stirred up. It's kind of amazing that this stuff still smells like a fresh fire after being underground for ninety-four years. 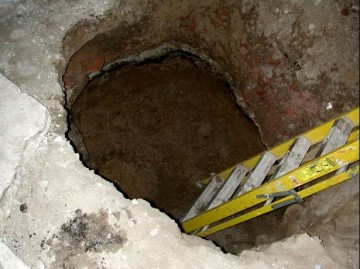 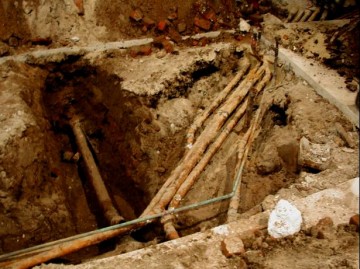 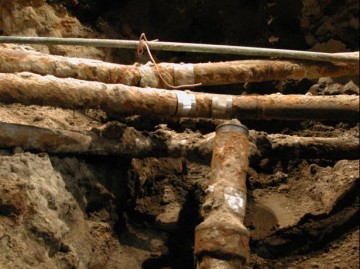 We introduced our contractor to our accoustical engineer, so that they could talk about the materials being used for the front wall, the ceiling, the ventilation system, and so on.

Our T1 line has been installed, and the router has arrived. The other end of it, in our friend's cage at above.net, has not been hooked up yet, though. The telco folks just left us an RJ-45 jack at the phone box on the front wall, so I had to figure the pinouts on the damned thing so that I could bring the line back into the office. "How hard could that be?" I thought. Shoulda just paid them to do it... Well, I think I wired it up right (the carrier-detect light on the router comes on) but we won't know for sure until the other end goes somewhere.

It's cool when people who haven't been here for a week come in and say, "my god, what have you done to this place?" That means things are happening, I guess.