I had this notion that I should be able to get video cameras and that they should be cheaper than camcorders since I didn't need the tape mechanism, and that's got to be the most expensive part. Well, I gave up on that notion, because it turns out to not be true (economics is weird.) So, I got a few more camcorders (Sony TR517), and now the webcam no longer looks like it's inside a fishtank (the emergency fallback camera we were using is from the early 80s... kind of amazing it still works, really.) As soon as I get around to stringing some more cable, the webcam will be able to cycle through multiple viewpoints, which will be cool.

Tuesday, the boys tore up the rest of the floor. There is a smooth concrete slab that runs from wall to wall, but on top of about 2/3rds of that was a raised wooden floor. There was a wood frame of 2x4s bolted into the concrete, and then 4'x8' pieces of plywood furiously nailed down to that. It was very hard to disassemble, until Alexis found us some 6' crowbars. The extra leverage helps a lot. After tearing up the wood, next the bolts had to come out. Since they were in concrete, you couldn't just yank them out, not without trashing the floor, anyway. So we cut them off with a grinder, which is kind of like a circular saw but lets you get right down next to the surface. Yay, sparks! 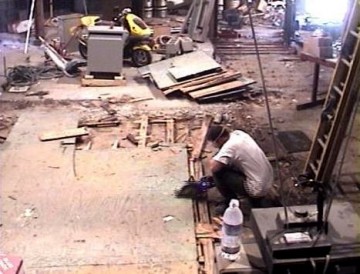 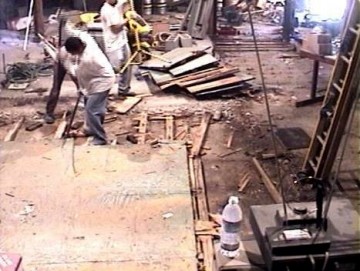 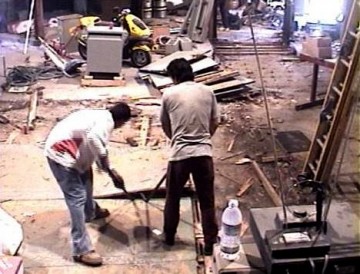 The new floor will consist of a layer of rubbery stuff of some kind, followed by two layers of plywood, staggered and bonded together; followed by a layer of thick waterproof epoxy paint. The plywood layer won't actually be attached to the concrete, except at the walls, which will give it a lot of bounce. Before laying the plywood down, however, we're going to have to make the existing concrete slab be level (it's not quite) by pouring a thin layer of self-levelling blah-blah over it (I forget what it's called.)

Wednesday, our DSL connection (and thus the webcam, and dnalounge.com email) went down at 2PM, and has been down ever since. It's now 21 hours later, and there's no sign of its return. Apparently Covad hates me. This is just ridiculous.

I've been spending my time fighting with computer bullshit as usual. I am in hell. I really need to find myself a sysadmin: some eager young college student who enjoys messing with Linux and PC hardware, because I find it... let's say, somewhat less than rewarding. I like writing software, but the install-and-configure-hardware side of things just drives me batty.

It's tough to find someone to hire to do this stuff, because I don't have a full-time job to offer them, it's more like, every couple of weeks I'll have some new problem to solve. For example, this week's hassle: "here's a CompactFlash card, here's a desktop Linux machine: make the machine able to read this card." So it's probably a few hours every week or two, for someone who knows what they're doing. I've been relying on the mercy of my friends when I get stumped (or just too frustrated) but the people I know who understand this crap have all given up their lives to startups, and don't have time.