Well now, what have the kids been up to while I was gone...

The plan set is complete. It turns out that it includes not only a set of blueprints, but also a rather thick book of instructions labelled "The DNA Lounge Project." I imagine a lot of this book is boilerplate, but there really were quite a lot of DNA-specific things in it. It was kind of sobering seeing all the tasks laid out in one place like that...

The project is being shopped around to contractors right now, and several of them have been coming in to look around the place in order to get a better idea of the scope of the work.

Our roof is leaking again. Since the landlord replaced it about a year ago, this is supposedly still covered under the warranty, but this is making the contractors suggest that maybe the best way to soundproof the roof is to replace the whole damned thing again. But as far as I'm concerned, we'll only be doing that if that's what costs me less money. I'm not gonna be hearing "well you know what you really ought to do..." any more. Spraying foam on the inside still sounds cheap and effective to me.

The boys have been tearing up the raised wood section of the floor, to expose the concrete slab underneath. The drywall ceiling in the upstairs lounge is gone now too, because the contractors needed to see where the supports and power were. Apparently there's not a whole lot of price difference between patching drywall and just replacing it, if you were going to be doing more than a few patches. So it all comes down. 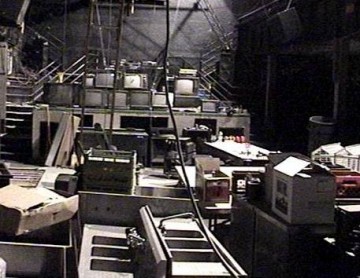 Barry and Alexis also sorted out the various sinks an refrigerators and things, and made sense of that giant jumble of equipment that was along the left wall. Now there's a much more orderly jumble along the front wall.

We're down two more Trackspots, because I'm a big softie and agreed to sell two more of the ones we got from DV8 to Cat's to replace the two that came tumbling down during the 30+ MPH dust storm at Thunderdome this year. Not a big deal, we still have plenty of extras. I just wish I'd seen them hit the ground! 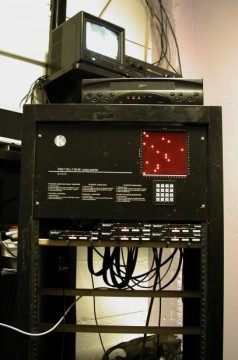 The video switcher has arrived, and I wired it up to the RF encoders and have successfully gotten a computer to talk to it. It's pretty cool. It was all shiny and black when I took it out of the box, but by the time I had it bolted into a rack and wired up, it looked like it was ten years old, thanks to the patina of grime and plaster dust that immediately coats everything that enters this building. I tell you, I can't have nice things. Anyway, I've got a little more software to write, and we still need to get some more cameras, but once that's done we'll be able to have the webcam automatically rotate among various views.

We've been having regular power failures this weekend: apparently the temporary power distribution setup that our electrician set up while the panels are being reconstructed is overloaded or something. This is a hassle, because the machine I'm using for our firewall doesn't have a BIOS setting that tells it to please turn on and boot up when power is restored. So any time the power goes out long enough for the UPS to fail too, we're off the net until someone goes in and turns that machine back on again. Sigh.

By the way, we're still taking donations of televisions! If you've got a TV you don't want that is capable of displaying a color picture (even a crappy picture) bring it by the club and we'll give it a good home! (Only TVs, not computer monitors.) Smaller TVs would be good, too: I want a wide variety of sizes, and so far, most of the tubes have been roughly the same size.