Someone mailed me the other day saying, "I think I missed a whole chapter somewhere... just how did you go from `400 amps is a ludicrously huge amount of power' to `work on the electrical upgrade to 600 amps has started'?" Well, how that happened is, the electrician convinced Barry that we needed it, and after several meetings where I expressed my complete disbelief that we need any more power now than we had before, I just got completely sick of arguing and said "fuck it, I don't care any more" and let them spend my money so that they'd shut up and leave me alone. Not the soundest business decision I've ever made, surely, but what can I say: it was a bad week.

Anyway, the electricians got the new electrical boxes installed, and have run some of the conduit from the club out to PG&E's box; once PG&E hooks up the power (when? I don't know, PG&E won't tell us) then they can start switching over from the old service to the new service. Right now just about everything's running off extension cords from the few working sockets, as all nonessential circuits have been unhooked and the conduit removed. 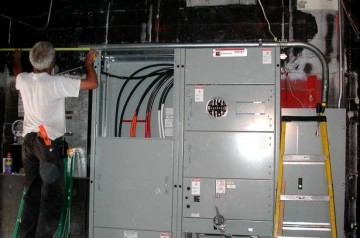 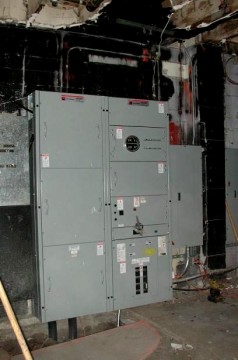 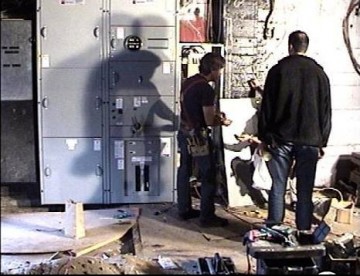 Electricians have all kinds of good horror stories. Did you know that concrete is a conductor? And that electricity can arc up to one inch per ten amps? So your typical 200A overhead power line can fry you if you're grounded and get within a couple feet of it.

Remember back when I said that we'd finally gotten our architect to commit to a date when the plans would be done, done, done, and ready to send out for bids? The date I understood was August 18th. You may notice that August 18th was some time ago, and we don't have the plans. Well here's a perfect example of why this is taking so fucking long:

"Oh, did I say I'd be done with the plans? No, I meant, that's when the structural engineer will be done with his plans. I still need to integrate his plans into my plans."

We have to put up with this kind of bullshit constantly. It's just stultifying.

Back in May or June, our architect told us that it was likely that we'd be open for business by the first week of September. He showed us a schedule and everything. The reality is that it's unlikely that we'll even have gotten our bid accepted by the end of October, and who knows when construction will actually begin. And of course I'm still waiting for the dropping of the other shoe, where we see how much the contractors actually say the job will cost. Because, remember, this same guy also assured us that the contractors' bids on his plans will end up being within our budget. So let's hope his money estimates are one hell of a lot better than his time estimates, or we're back to square one.

And now, the nerd news:

I finally replaced the firewall machine; now it's running OpenBSD instead of Linux, and it's much, much better. Don't try and use Linux for a firewall, kids: the moving-target Linux firewall software is just crap. The OpenBSD stuff is way simpler, more powerful, and generally just works right, whereas Linux... doesn't.

With the OpenBSD firewall, I was able to bring my RealProducer machine back inside the firewall, something that wouldn't work when the firewall was Linux-based.

We're still trying to get a better network connection to the club, since DSL is crap. A friend of a friend has generously volunteered to give us bandwidth for free, so long as we provide the telco T1 circuit from the club to the router he has in colo at Above.net. This will probably be a huge cost savings, but the problem is that it means we need to get a T1 from San Francisco to San Jose, which is pricey... People keep telling me "oh, that should be around $300/month," but that's not what we're finding:

These prices are just for the circuit, not for IP bandwidth. If you know of someone who can get us a better price for a T1 circuit from SF->SJ, please let me know! Or, for that matter, SF-local circuit+bandwidth at better than the best price above...