Much demolition and hauling of trash this week. We tore apart the Flintstones couch, and the floor of the upstairs bar. The upstairs front bar had a concrete floor, poured on top of the wood of the balcony. The "Flintstones couch" was this built-in booth on the second floor that was constructed of a heavy wood-and-chicken-wire frame with thick concrete poured over it. It was probably the ugliest, most uncomfortable thing in this place, and also one of the hardest to destroy. But it's gone now. And I'm still sore.

We also gathered lots more garbage from all the nooks and crannies around the club; the place is fairly stripped down now, and the pile of garbage downstairs is impressive.

Work on the electrical upgrade to 600 amps has started; a few new electrical wiring cabinets arrived yesterday. They are these big gray metal boxes that are three feed wide and seven feet tall. Apparently they're mostly empty space for "wire-bending room," since the wires in question are really thick, but come on! One of these cabinets will have exactly six wires in in: three lines come up through the floor from the power company; and they are bolted to three wires that go on to the next box. Six wires, six bolts. For this you apparently need twenty-one cubic feet of space. Apparently the codes change constantly, and every five years, these boxes double in size. 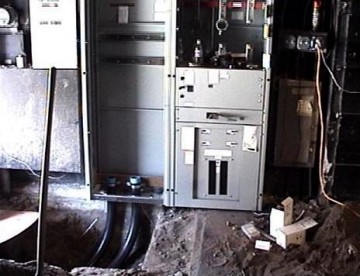 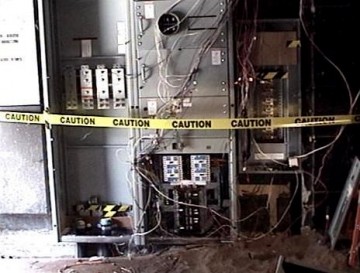 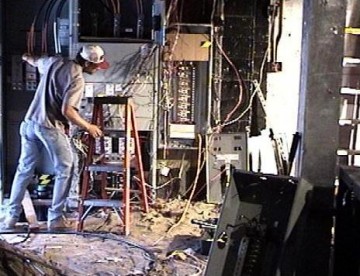 I got a second video grabber card, so now we have both a RealVideo broadcast and a super-low-tech slideshow that updates every 30 seconds on the webcam page. (I had to get a second card to do this because the Linux drivers don't allow two programs to access the video stream at once...)

I got to cut through inch-thick solid metal pipes today with a variety of saws! The winner and still champeen was the circular skil-saw, easily beating out the sawzall and hand saw. I think that the hand saw was actually faster than the sawzall, though it took a lot more effort. Screaming metal, sparks everywhere! It was all very Einstürzende Neubauten.