The SFPD is being sued over the search-and-seisure terms they forced 1015 Folsom to agree to! There's an article about it in today's Guardian.

Oh, and apparently we have yet another new police captain, as of August 5th. It seems that Captain Harper was also transferred to the airport, just like Captain Martel a few months before her. Southern Station's new boss is Captain Antonio Parra.

Much to our amazement, we were finally able to get our architect and structural engineer to commit to a date when the plans will be done: August 18th. Until now, the answer has always been "two weeks." No matter when we asked. Or how long it had been since the last time we asked.

Once the plans are done, then we can send them out to contractors to bid on the project, and also to the City, to issue the construction permits. The City will probably demand changes, but our architect assures us that those changes will be minor and won't result in our having to restart the whole process. He also assures us that the contractors' bids won't end up being twice as much as we expect them to be, also causing us to restart the whole process. I guess if that happens, I call the whole thing off, sell my loft, and just move in here. Either that, or I climb a clock tower with a high powered rifle. 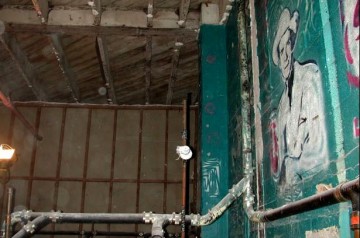 We've agreed on a final design and price quote for the new balcony railing, so as soon as the structural engineer approves that part of the plans, construction of the railing segments can begin.

The webcam is still down, and we haven't figured out why. Our best guess at this point is that something's gone even more wrong with the DSL connection, and the latency is too high for the servers to notice each other. Covad's techs are testing things on their end, so maybe things will clear up soon. In the meantime, we're still getting quotes for T1 pricing. It's not cheap.

I got a bunch of RF encoders that seem to work pretty well. As I mentioned earlier, the idea is to feed data to the various TV monitors by building a private cable system inside the club, instead of running 16+ cables to each TV. We just run one wire to all of them, and have 16+ channels on that wire.

Stefan stopped by and gave me a lesson on video mixing and distribution. It sounds like getting a 16-way TBC would be pretty difficult, but he had another idea. Since televisions are not picky about getting clean sync, but computer video cards are, we can reduce the problem to cleaning up the sync on the line that goes to the computer. He recommended that, in addition to a matrix switcher, I pick up a used Panasonic MX-50 video mixer to do this: it's a box that takes 4 video inputs and lets you do all kinds of wipes and fades between them, and by necessity includes a TBC. Now, since it only has 4 inputs, not 16, we'll have to do some creative switching, but I think I understand how to do it.

So there'd be two modes of operation: autopilot-mode, where the video mixer was being used only as a TBC to clean up the signal before it got to the webcast computer; and interactive mode, where someone was actually mixing live video (which is what this machine is actually for.) If we've got someone who knows how to run the thing standing in the dj booth with it, webcasts of live performances will actually look good.

I guess I ought to get the matrix switcher and see how badly the video card actually does deal with channel switching. If it's not that bad, we can drop in the fancier video effects at a later date.