Barry was in Portland this weekend, and talked to a couple of bar owners who had installed Glycol systems recently, and according to them, it just doesn't work if you go more than 20' horizontally. They said that if you ever go more than a couple of minutes between pouring a beer out of a given tap, then a lot of the contents of the tube turns to foam; they both said that this resulted in 30% of the product going down the drain. Within a year after installing it, they both tore out their systems and installed coolers at the bar instead of in the back room, and their profits went way up.

The distributors who want to sell us the Glycol system tell us that this is nonsense, of course. But whe you play the "follow the money" game, you see that it would be in their interest for us to throw away 30% of the product, because we buy that product from them... So they're not exactly objective in this situation. The problem is, we don't know anyone else who has actually installed and used a long-haul Glycol system.

If it turns out that we can't use Glycol, then we're going to have to redesign the front bar again, to make room for keg coolers back there. This is a hassle, and might mean we'll have to have to reduce the number of bartenders who can work that bar.

We also spent a while trying to figure out the economics of beer in bottles versus beer in kegs. There are a lot of variables there, so it's tricky. Bars generally charge the customer the same for the same brand of bottled versus draft beer, but bottles cost the bar more than kegs do. But on the other hand, it's a lot faster to hand someone a bottle than to pour a beer, so you can serve more customers. And glasses (and plastic cups) cost money. And the serving sizes are different. And there's a lot more spillage when using a tap. And...

So after much figurin', We decided that the prices, when taking into account all these other factors, are pretty much the same. Except that since you can move bottles more quickly than pints, they probably come out ahead. So now we're playing with bar designs that assume we have mostly bottles and only a few things on tap. (This isn't just a matter of what products you stock: the bar itself has to be built for it, so that you have room to store all those bottles and/or kegs.)

Our architect finally got plans from the mechanical engineer for the ventilation system. Basically there will be a pair of ducts, one on each side of the building above the balcony.

We still don't have plans from the structural engineer about the dj platform. I think that's the last missing piece preventing us from having a complete set of plans on which we can get bids.

Brian's pulled down most of the sheetrock on the underside of the balcony, exposing the struts. The ceiling seems higher there now, and this mean that the under-balcony lighting can be recessed. We also had our electricians disconnect most of the nonessential conduit, and pulled that down, so now the existing electricial situation is a lot easier to understand. 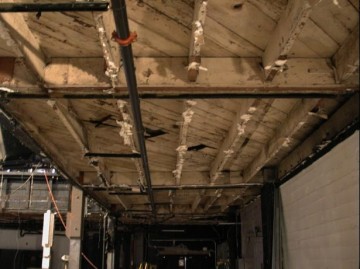 We got a love letter from the police the other day, telling us that we are in violation of our permits because we haven't yet passed our building and noise abatement inspections. That really made my day. It turns out that it's just bureaucracy, though: some part of the lumbering beast didn't know (or didn't believe) that we're not actually open yet, so now we have to waste time convincing them of that with another paperwork dance. (Also, as far as I know, we did pass our building inspection.)

And in this week's club and restaurant closure news: