Well that was a little scary. I had just seen a movie (High Fidelity, it's great) and was riding home when I saw this giant plume of black smoke in the sky. I was trying to guess where it was (6th Street maybe?) when Barry called and told me that our architect had just called him and said "hey, I think your club is on fire!" Barry was a little incredulous at this: "I know it's April 1st, don't screw around with me like this!" "No, really!" So he called a friend down on 11th Street who said, "dude, the whole block is on fire."

But fortunately for us, he meant the next block over: the alley between between 11th and 12th streets, not 11th Street itself (where the club is.) So I biked home to get my camera, and headed toward the fire, like a good little monkey. By the time I got there, there was a huge crowd of people, and the smoke was pretty thick. Apparently I had missed the height of the fire, though: a little while before I got there, the whole sky had been black.

I asked the security guard at the construction site on the corner if I could climb up their scaffold to get better pictures, but he wouldn't go for it. So these were as close as I could get: 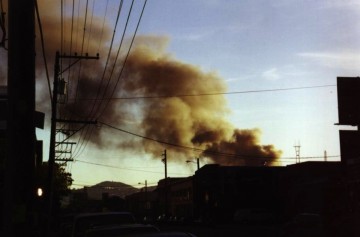 The view from 4th Street, a mile away.

The view from Folsom between 11th and 12th. 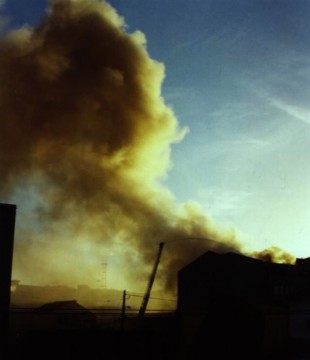 The view from DNA. 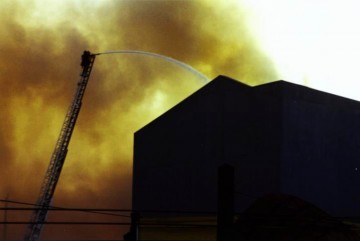 The same view, zoomed in.

Apparently the fire started at the City Lights warehouse, but it looked to me like at least one apartment building was on fire as well.